Perhaps the world’s most unusual fashion show, complete with sonic fashionware, vests sewn with an accordion-like instrument between, and many more things too far out to describe.  Great photos.

footage from the runway

streaming video of the show, courtesy of paula aguilera + jonathan williams, and the mit media lab

Heartbeat Hoodie explores the idea of involuntarily documenting parts
of life using a camera to take photographs at moments of interest or
excitement. The camera, strategically placed above the eyes on the
hoodie, takes photographs as the wearer’s heart rate increases. The
camera is wired discreetly through the seeming of the garment to a
basic stamp that communicates with a wireless heart rate monitor.
The basic stamp uses an algorithm to analyze the heartbeat for
increases that might signify a moment of excitement or interest as
opposed to physical exercise.
At the end of the day, you can reflect on moments that caused interest
and excitement by viewing the photographs. Since the photographs are
taken involuntarily, you may find new points of interest that you were
not conscious of. 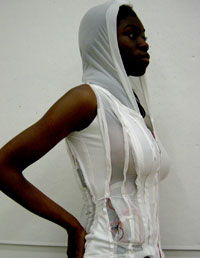 darkWatch is a mobile communication device that takes the form of a
watch but displays dark or secret intervals of time. Embedded in a
silicon rubber is an LED display that modulates according to an
interval of time set by the user. The device is intended to communicate
forbidden information in a semi-public, encoded form. For Seamless, I
will create three case studies exploring how this dark interval can be
both defiant and hidden. 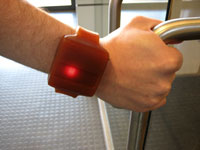 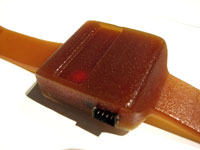 This project was inspired by the human tendency to equate our
perceptions to those of the rest of the natural world and evaluate
other systems solely in terms of human experience. The
elephant-inspired costume investigates the pachyderms’ ability to
detect infrasonic and seismic vibrations. The wearable has long
telescoping sleeves which conceal the arms and hands and connect to the
floor. Thus, the human is asked to sacrifice defining human
characteristics (bipedal, with opposable thumbs) in order to experience
a supplemental sense. The sensor is an accelerometer which picks up
vibrations in the range of 5-20 hz, extending below humanly detectable
limits. The signal is processed to make it audible to humans and
broadcast to create a shared sensory experience. 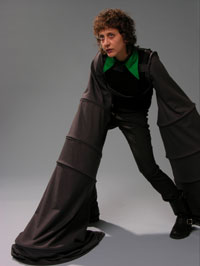 Two vests sewn with an accordion-like instrument between; individuals
wear them facing each other; as the two participants embrace and pull
away their movements generate sound. The bellows of the ‘accordion’,
when extended to their maximal capacity, reveal the word ‘exhaust.’ In
other words, the air fills the bellows when the individuals, frustrated
(‘exhausted’) by each other, pull apart. This air is expelled/exhausted
as the individuals embrace, paradoxically suggesting that through
embrasure the frustration is dispelled or exhausted. 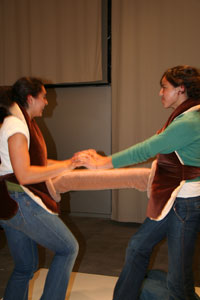 A 1970s Fendi bag which has been transformed into a boombox, the Fendi Ghetto Blaster
conflates class signs in a somewhat comical yet critical way. It was
most recently used for a performance in Central Park titled Pierre Bourdieu Goes to Town.
The performance featured music by the Chicago-based band King Kong
whose repetitive lyrics and electronic sound playing on the notion of
presence and absence provided an important foil to the visual elements.
A throwback to an obsolete technology, the boombox, which in the ’70s
and ’80s was famously referred to as a ‘ghetto blaster,’ is
instrumental to exploring a critical discourse on class and luxury. 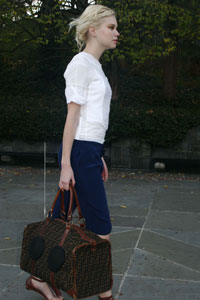 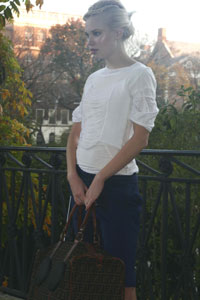 photos from the runway

iPod Status is a wearable information display. It reads artist and
title information about the currently playing song on an attached iPod,
and presents this information on a small screen that attaches to any
messenger bag shoulder strap. Many of us have taken rides on public
transportation and wondered what the interesting-looking person beside
us is listening to. iPod Status is intended to encourage social
connectedness by making this hidden information visible. 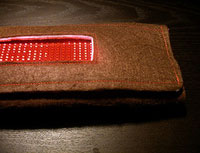 Sonic Fabric is a textile woven from 50% recycled, recorded
audiocassette tape and 50% cotton. The material retains its magnetism,
and pieces made from it can be “listened to” by dragging an apparatus
made from a tape head along its surface. Sonic Fabric was inspired by
small strands of cassette tape used as wind indicators, or
“tell-tails”, on sailboats, and by Tibetan prayer flags inscribed with
wind-activated blessings. The batch of sonic fabric used in the pieces
for the Seamless show was prerecorded with The Sounds of (1/2)Life, a layered collage of sounds and music, including Beethoven, Jack Kerouac, Laurie Anderson, crickets, whales, and the icaros (medicine songs) of a Peruvian shaman. 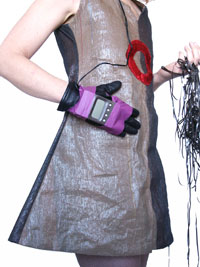 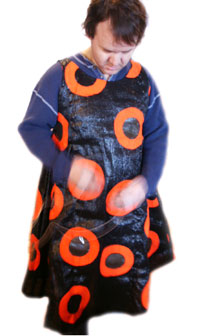 Modes for Urban Moods are a suite of wearable coping mechanisms which
explore relationships in public spaces and materialize invisible social
networks. They are tactile, spatial, sculptural expressions fashioned
to the body. Space Dress is a dress that inflates, expands in size,
according to its user decision and in specific situations. It is
designed to cope with stress, anxiety and claustrophobic situations –
or, simply, for comfort. It was originally designed for rush hour in
the MTA, New York City’s subway system. Other Modes are: Wings, Loud
Bubble and Emergency Ring. 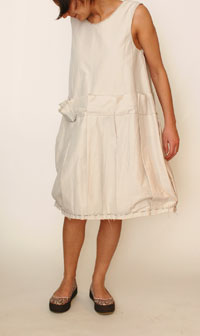 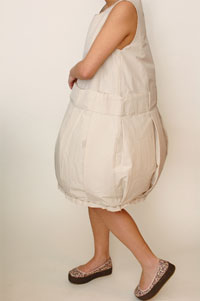 The sense of touch is essential to emotional health and development. taptap is a
wearable accessory that can record, distribute and play back
affectionate touch. Designed to look like a normal scarf, taptap
provides extra warmth and comfort by simulating the touch of a loved
one. Flexible touch circuits can be placed in modular pockets within
the scarf to record and play back the pressure of touch, the warmth of
contact or the percussion of a friendly tap. taptap can bring
nurturing touch to under-loved children, familiar affection to
isolated relatives or sensual contact to a distant lover.