Robot Ryomei Engineering, a subsidiary of Mitsubishi Heavy Industries, in cooperation with two other Hiroshima-area engineering companies, has developed a robotic carp. 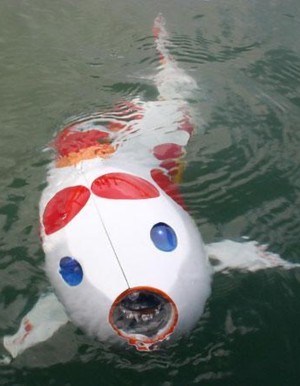 The robot was demonstrated at a pond on the grounds of Hiroshima Machinery Works.

The robot is modeled after a Nishiki koi carp as a form of tribute to Hiroshima Castle (whose nickname Ri-jo means Koi Castle). The 80-cm (31-inch), 12-kg (26-pound) fish has a white body with bright red spots. Though the tail movement is very smooth and lifelike, the remote-controlled koi is capable of moves that a genuine koi is unable to perform, such as swimming in reverse and rotating in place.
The robot is Ryomei Engineering’s fifth in a line of fish robots that includes a sea bream, a prehistoric coelacanth, and a golden carp. New features added to the robotic koi include a CCD camera built into the head and sensors for analyzing water quality.