While some famous painting like the Mona Lisa by da Vinci and
Michelangelo’s work in the Sistine Chapel will never be sold, many are
on the open market being sold in elite auction houses. Of the paintings
that have been sold in recent years, these are the top 10 most
expensive ones.

What is it that makes a painting more than just its composite
materials. Is it the age-old wonder of catching lightning in a bottle,
that frozen instant where genius casts its light in an ephemeral medium
and is captured there for all to see? Perhaps more likely is the
scenario that a bunch of rich people are trying to out-do each other.
But when it comes to truth and beauty captured in colored oils, people
have paid unbelievable amounts of money for some rather unusual pieces
of artwork, as you’ll see from our list below.

Yup,
that’s Picasso as in Pablo. You might have heard of him – bald little
guy, lot’s of mistresses? Anyway, remember the name, you’ll be seeing a
lot more of it before we’re through.
This self-portrait
was painted in 1901, around the same time as his good friend Casagemas’
suicide, which led to his famous blue period, in which he had his
handlers give him only the blue Smarties, and discard all the other
colors. No, wait, that was the lead guitarist for Motley Crüe.
Pablo,
on the other hand, just got kinda sad for awhile and used the color
blue a lot, and 88 years later, someone at Sotheby’s moved their pinky
finger at the wrong time, and BAM! $43+ million out of pocket.
By
the way, the title of this painting is not the artist doing his Rocky
Balboa impression; "Yo" means "I" in Spanish, so the title in English
is "I Picasso." Personally, however, we here at SoYouWanna.com have
never picassoed, at least not in public.

11. Nude in a Black Armchair

Artist: Picasso
Price tag: $45,102,500
Purchased: Christie’s, New York (November 9th, 1999)
Nude in a Black Armchair (Nu au fauteil noir)
is from a series of portraits Picasso painted of one of his many
mistresses (busy guy), Marie-Therese Walter. Looking at the painting,
though, her own mother wouldn’t recognize her, so he probably just told
his wife that it was a tree. Supposedly, the woman is seated with her
arms folded over her head in a suggestive pose, but as Pablo’s art
therapist may have said at the time, this guy is a few sandwiches short
of a full picnic basket. And that’s why his paintings are worth so much
money today.
In another instance of crazy rich people
rushing about trying to spend the most money, the day after this one
sold, number 7 on our list was purchased for even more ridiculous
amounts of cash. Always back to back, like lemmings. Rich monkey see,
rich monkey do.

There
were two versions of "The Dream," which showed a bunch of curvy lines
and semi-recognizable shapes making up a woman whose head is lolling to
one side as she dreams a lovely dream. This one was painted in 1932,
and there are rumors and unconfirmed reports floating around that
maybe, possibly, by a small stretch of the imagination, it might have
been one of his mistresses. Just maybe. Cubism was one of those great
jokes on the world, a way for artists to mess around with different
shapes and have fun, and then see what people say about the whole thing.

Don’t
you just love the formality of his anti-form? The way it breaks down
any structural imposition or classicism? Isn’t it wonderfully
unrecognizable as any freakin’ thing seen by human eyes? There are
48,402,500 good reasons to paint in the Cubist style, but
unfortunately, we only thought of them after the artist had died.

Get
used to seeing this guy’s name, too. Not to reveal too much
prematurely, but Van Gogh has got three of the top ten most expensive
paintings on our list. And he couldn’t give his work away when he was
alive. Don’t you just love irony?

Irises
is one of a series of paintings of the same subject, with which he was
mildly obsessed. But this was par for the course for Vincent, who did
nothing but obsess.

8. Woman Seated in a Garden

The
woman seated in the garden was actually the artist’s mistress from the
pre-war period, Dora Maar. The painting’s subject is, as usual, barely
recognizable as a woman, let alone a garden, and was it apparently
painted entirely in one day. Which might explain a few things. Maybe
the paintings are so rough and child-like because Pablo was always in
such a rush. With his many mistresses, it’s a wonder he had any time to
paint at all.

Not that the price for
his paintings suffered as a result. Think of the hourly rate! Let’s say
16 hours tops to paint the thing, and a selling price of $49.5 mill . .
. that’s over $3,000,000 an hour! And there wasn’t even an artist’s
union at the time. But it was actually the fine people at Sotheby’s who
raked in a good-sized chunk of the dough on this one, and they never so
much as painted a wall.

Peter Paul Rubens painted the theme more than once. One version, now in
Munich, was engraved and reproduced as a painting as far away as colonial Peru.
Another, his hectic Massacre of the Innocents is one of the most valuable
paintings in the world, after being purchased by Kenneth Thomson, 2nd Baron
Thomson of Fleet for ¡I49.5 million GBP (then equal to some $76.7 million USD)
at a 2002 Sotheby’s auction.

OK,
OK, we’re getting a little tired of seeing this name on the list, too.
Yes, five of the top ten paintings were painted by Pablo. At least
Picasso was able to make a little money off his fame when he was still
alive, unlike Van Gogh, who instead enjoyed the fruits of insanity,
poverty, and tinitis.

The most
expensive of the Picassos, "The Marriage of Pierrette" was painted in
1905. This is one of his early works from a period of impoverishment in
his life. Paintings from this period generally sell for more than the
later works, which are more difficult, more cubist, and more downright
unrecognizable.

This painting was bought by a
Japanese businessman, back when Japan still had an economy. We assume
that he did not threaten to set it ablaze upon his death, as one of his
compatriots may have done with an even pricier slab of canvas.

As
you might expect from the title, this is a painting of a spatula and a
shaved goat. Just kidding. Could this guy be any more prosaic? Cezanne,
often called the father of modern painting, was a French artist working
in the Impressionist period, but he is known as a "Post-Impressionist"
for his unconventional and influential style.

Anyway,
the bunch of fruit and stuff he happened to have lying around is the
most recent purchase of the top ten most overpriced paintings in the
world. It was purchased anonymously, which is no surprise. We’d be
embarrassed, too. 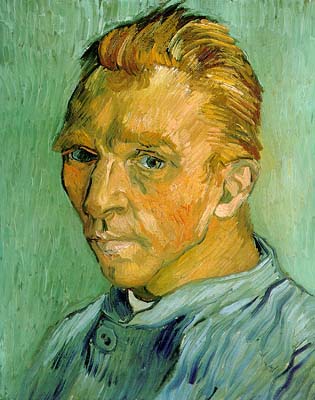 As
the title says, this is literally a picture of Vinnie without a beard.
Van Gogh painted it for his mother the year before he died, and it was
one of his last paintings (as well as his last self-portrait). Vincent
decided to clean himself up a bit, not look so scruffy, and have both
ears intact for this self-portrait for Mom.

That
same year Vincent wrote to his brother in a little-known letter: "Dear
Theo, please send more money. There just aren’t enough Japanese
real-estate tycoons in Europe right now, so nobody is buying my
paintings. Also, Gaugin is being a pig about the rent, and I’m hearing
this ringing sound all the time. Do you hear it?"

So
it was clearly the beginning of the end for Vincent, and his paintings
of this time are consequently considered to be his best. (You know the
old adage: the crazier the artist, the better the work.)

This
painting was purchased by Japanese businessman Ryoei Saito, who two
days earlier had paid the highest price ever for a painting (we can’t
tell you what it is just yet – you’ll have to wait).

An ambitious showpiece of a painting, Au Moulin de la Galette
exhibits an air of courtship, fun, and frivolity. Portraying two girls
dancing, and painted in a style typical of Renoir’s early period of
Impressionism, the work was exhibited in the third Impressionist
Exhibition in 1877. Despite the dappled light and diffused look of the
Impressionistic style, there is a classical stability in the
composition. This aspect of Renoir’s work would come out more and more
as he abandoned impressionism in his later paintings. One last cool
thing: most of the people in the painting are Renoir’s friends.

As
you’ve probably gathered, old Vince was, like many great artists, just
a tad loony. During one of his frequent stays in the nuthouse, he
painted this touching picture of his doctor looking completely
exhausted, presumably from chasing Vinnie around with a syringe.

Japanese
businessman Ryoei Saito (who paid a mere $78.1 million for a Renoir two
days later) claims the title for shelling out the most insane amount of
money ever for a work of art. Mr. Saito himself could probably have
benefited from some time under the care of the good Dr. Gachet. Right
after purchasing this painting, he threatened to have it burned when he
died, to prevent his heirs from having to pay a huge inheritance tax.
He died six years later, and no one has seen Portrait of Dr. Gachet since.

So
the question remains: did 80-plus million bucks worth of canvas and
oil, slapped together by a lunatic, go up in smoke at the hands of
another lunatic? Or was the painting simply sold to an "anonymous
party?" We may never know.

"Boy with a pipe" is a painting by Pablo Picasso, painted in 1905,
during the 24 year old artist’s Rose Period, soon after settling in Montmartre,
France. The oil on canvas painting, measuring 100 ¡¿ 81.3 cm (slightly over 39
¡¿ 32 inches ), depicts a Parisian boy holding a pipe in his left hand. Owned by
the estate of John Hay Whitney, on May 4, 2004, it sold for $104.1 million USD
at an auction in Sotheby’s in New York, after having been given a pre-sale
estimate of $70 million by the auction house.