In a list of the 10 hottest cars now on the market, six of the 10 are products of the Toyota Motor Co. The Prius tops the list and all three of Toyota’s low-priced Scion models are on the list, as well.

To find the 10 hottest cars in America for CNNMoney.com, Edmunds.com, a partner providing data and content for CNN Web sites, looked for three things: Actual selling prices closest to the vehicle’s full sticker price; lowest amounts in rebates or other sales incentives; shortest times spent on dealer lots before being snapped up by buyers.
The Prius scores big in all those areas. While all other cars on the list sell for at least some small amount under their actual sticker price, once incentives are factored in, the Prius still sells for 10 percent over sticker price.
On average, a Prius spends just nine days on a dealer lot before being driven away by a buyer, second only to the Mini Cooper, which lingers for just six days. (If a car has an average "days to turn" of less than 10, it generally means the cars are mostly pre-ordered so they have already been sold before they arrive at the dealership.)
In this sort of analysis, Toyota’s low-priced Scion brand benefits from the fact that very few of its cars are purchased from dealer inventories. Instead, most buyers order customized versions. Those vehicles are customized before being sent to the dealership. That makes Scion’s "days to turn" very low, said Mike Chung, a pricing analyst with Edmunds.com.
Toyota’s Rav4 is helped by the fact that it was recently redesigned. The Rav4 has always been a popular Toyota model, said Chung, and the redesign has boosted demand for it.
Two American cars made the list. One is the Pontiac Solstice, a two-seat convertible sports car from General Motors that first went on sale last fall. The Solstice is still selling for, basically, full sticker price.
The other is the Ford Escape Hybrid. Of all the cars on the list, though, the Escape Hybrid has the biggest gap between its sticker price and actual selling price at 2.5 percent and it has the longest "days to turn" at 36. Ford has recently announced some incentive programs on the Escape Hybrid.
With one exception, these are not expensive cars. In fact, the three Scion cars, the xA small wagon, the tC coupe and the xB van cost less than $18,000.
The Lexus 400h, a hybrid luxury SUV made by Toyota, is the only relatively expensive car on the list. Its average sticker price is $47,919. 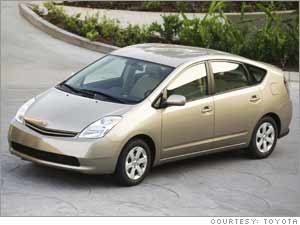 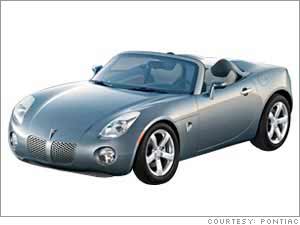