The researchers at the U.S. Department of Energy Facility say data on the properties of a subatomic particle, the B sub meson, suggest the particle oscillates between matter and antimatter in one of nature’s fastest processes — more than 17 trillion times per second.
That, say the scientists, might offer the first glimpse of the contributions of new physics, such as supersymmetry, to particle physics. 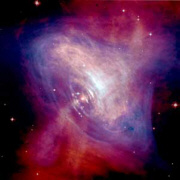 The DZero result is described in a paper submitted to the journal, Physical Review Letters.
DZero is an international experiment involving 700 physicists from 90 institutions and 20 nations.