People who mix alcohol with energy drinks like Red Bull can often feel less drunk than they really are, a study suggests.

The Brazilian team compared the reactions of 26 men given either alcohol, Red Bull or a combination of both in three drinking sessions.
Although the men perceived themselves to be less impaired when taking the mix physical tests proved the opposite.
The study is published in Alcoholism: Clinical and Experimental Research.

The team, led by psychology professor Maria Lucia Souza-Formigoni of the University of Sao Paulo, said those who mixed the caffeine drinks and alcohol reported an increased sensation of pleasure and a reduction in sleepiness.

This had led some to suggest that the combination might reduce the depressive effects of alcohol. 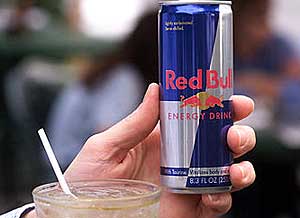 But the team’s results showed a "considerable disconnect" between the subjects’ perceptions and objective measures of their abilities.
Professor Souza-Formigoni said: "In Brazil, as in other countries, people believe that Red Bull and other energy drinks avoid the sleepiness caused by alcoholic beverages and increase their capacity to dance all night.
"Many nightclubs offer this mix among their cocktails."
Her study in some ways reflected this assumption, with subjects on the combination of Red Bull and alcohol reporting less perception of headache, weakness, dry mouth and impairment of motor coordination.
But objective measures of coordination showed Red Bull consumption did not reduce any of the negative effects alcohol has on coordination or visual reaction times.
Professor Souza-Formigoni said: "In other words, the person is drunk but does not feel as drunk as he really is.
Fellow researcher Professor Roseli Boergnen de Lacerda, of the Federal University of Parana, said: "The implications of these findings are that this association of alcohol and energy drinks is harmful rather than beneficial as believed by consumers."
She added that, because people thought they were less impaired than they really were, they were more at risk of car accidents.
The team said drunk drivers were dangerous, not only because their reactions were delayed, but because their capacity to evaluate risks was also affected.
A spokeswoman for Alcohol Concern said that people needed to understand that the sensation of well-being did not necessarily mean that they were unaffected by alcohol.
She said: "This is a small study but it does highlight the risks of excess drinking in relation to personal safety.
"Alcohol affects physical coordination and impairs an individual’s ability to gauge how safe they are in a particular situation and take appropriate action.
"So any drink that heightens a person’s perception of being in control, when they are not, could increase the potential risk of harm."
A spokeswoman for Red Bull pointed out that all impairment or deficits, referred to in the small study, were entirely due to alcohol consumption and not Red Bull.
She said the firm did not promote the use of the energy drink with alcohol.
She added: "Red Bull strongly advocates the responsible use of alcohol at all times.
"The position of Red Bull, in line with responsible adults and driving organisations worldwide, is that it is absolutely wrong to drink alcohol and drive at any time, regardless of whether alcohol has been mixed or not.
"Driving organisations, including the RAC, have endorsed the sole consumption of Red Bull or other caffeine-based drinks whilst driving to improve concentration and reaction time, and therefore safety."