Three years ago, Apple Computer Inc. chief executive Steve Jobs persuaded major recording companies to buy into his vision of a simple, one-price-fits-all online music store. As Apple’s iTunes grew into the undisputed king of digital music sales, recording companies welcomed the revenues to cushion a five-year decline in CD sales. Now, however, some labels feel hamstrung by Jobs’ insistence on pricing all tracks at 99 cents.

With the labels expected to enter into music licensing discussions with Apple this year, any moves by Apple to abandon uniform pricing will test whether music fans are willing to pay more to download music that many only a few years ago acquired for free.
"The labels really want to be able to boost up the price for downloads on new releases," said Matt Kleinschmit, a digital music analyst with the Ipsos Insight market research firm. "The question is, are we at a time now that we want to experiment with variable pricing?"

Recording labels make about 70 cents per download but could pocket significantly more by increasing retail prices by just a few cents.
Apple and the major recording companies declined to comment on their licensing deals or the possibility of price changes.
The dispute has percolated for months, making Apple’s relationship with the labels seem acrimonious at times. The issue is complicated by several consumer lawsuits and ongoing government investigations into possible price-fixing by the labels.
Last fall, Warner Music Group Corp. CEO Edgar Bronfman Jr. suggested Apple should allow different download prices for songs and even give the labels a cut of iPod sales.
EMI Group PLC CEO Alain Levy agreed that songs by top-selling bands should be priced higher while tracks by lesser-known artists should be discounted — essentially the same approach to wholesale pricing in place for CDs and most consumer goods of varying quality.
Jobs has argued that recording companies already make more profit by selling a song through iTunes than on a CD, which carries extra marketing and manufacturing costs.
"So if they want to raise the prices, it just means they’re getting a little greedy," Jobs said at the Apple Expo in Paris in September.
The push by labels reflects an industrywide scramble to reap the most from a business model that only three years ago seemed unlikely to survive amid overwhelming online piracy.
"The music industry is continuing to go through this huge transformation," said Michael McGuire, vice president of research at Gartner Inc. "To the extent that they see a market that’s growing, they’re going to try to take advantage of that." 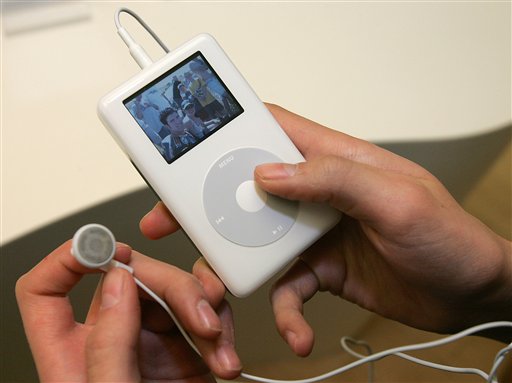 Last year, 353 million digital tracks were sold in the United States, about one and a half times more than 2004, according to Nielsen SoundScan.
Before the launch of iTunes in April 2003, recording labels had licensed content to music subscription services that let customers listen to music as streams on their Internet-connected computers. They charged extra for a limited number of downloads, the type that can be played while offline or transferred to a portable player.
But legitimate music services didn’t fully take off until Jobs persuaded the labels to sell permanent, a la carte song downloads on iTunes.
Today, according to Apple, iTunes has roughly 80 percent of the U.S. music download market, running well ahead of rivals like Napster Inc. and RealNetworks Inc.’s Rhapsody, both of which remain focused on subscriptions.
Apple does sell albums at different prices. And some online music retailers offer song downloads as low as 79 cents. But the bulk of single download sales remain at 99 cents, a price seen as a key threshold for music fans.
"After you cross that 99-cent psychological line with consumers, you’re going to hurt sales," said Wayne Rosso, who headed the now-defunct Grokster file-swapping service and is currently working on a new service licensed by recording labels to sell downloads.
The price of music has already become an issue for some music fans. At least two consumer lawsuits have been filed in federal courts in New York and San Francisco claiming the labels have conspired to fix prices of online music and CDs.
Meanwhile, New York Attorney General Eliot Spitzer and the U.S. Department of Justice are conducting separate investigations. Warner has said it’s cooperating with the inquiries, while the other labels haven’t publicly commented.
Few details have been released, but the probes echo a federal antitrust investigation in 2001 that looked at early ventures into online music by recording companies. That probe ended after investigators found no evidence of wrongdoing.
Making a case this time would require authorities to prove collusion among labels or retailers, said James Wade, a former chief of the Department of Justice’s antitrust division and the person who led the previous probe.
"In a price-fixing case, it’s not enough to just show that ultimately competitors are just charging the same price," Wade said. "You have to somehow show there’s an agreement between them."
As the labels and Apple hash out their differences, Apple’s market dominance likely puts it in the best position to dictate terms, analysts said.
"The power balance at this point is probably still going to be on the side of Steve Jobs and Apple," Kleinschmit said. "Can the record labels really afford to pull their catalog from iTunes?"
Labels could respond by threatening to cut back the special promotional exclusives that now help drive traffic to iTunes, offering them instead to other online retailers or to wireless carriers that typically sell a song download for more than $2, analysts say.
But that would be a gamble.
"We can throw variable pricing in and we can raise prices of a hit song, but it doesn’t mean consumers will buy," said Charles Wolf, securities analyst for Needham & Co. LLC. "They have an alternative — get songs for free."