7-Eleven is introducing its second terminals called Vcoms this year. Often referred to as ATM’s on steroids, the Vcoms dispense cash, sell Verizon services, handle bill payments and send money to other people. While cashing checks, it will be snapping front-and-back digital images of the checks and dispensing a receipt with the images on it.

Convenience stores, best known to weary motorists as sources for drinks and snack chips, are starting to gain a reputation as good places to pay bills, cash checks, send money and buy cell phone minutes. Automated teller machines have long been a staple in these stores, but now several major chains are installing kiosks that are able to do a lot more.
Way ahead of the curve is 7-Eleven, which is introducing its second wave of custom-made terminals called Vcoms this year. Often referred to as ATM’s on steroids, the more than 1,000 Vcoms dispense cash, sell Verizon services, handle bill payments and let customers send money to other people. They can also cash checks to the penny, simultaneously snapping front-and-back digital images of the checks and dispensing a receipt with the images on it.
Aiming to keep up with 7-Eleven, Exxon Mobil and Circle K have introduced bill payment kiosks in some areas, with plans to take the programs national. Sunoco just set up a pilot involving the same type of kiosks. These machines are expected to become standard in convenience stores of all sizes.
"The convenience retailers want to become a bank for the unbanked," said Hamed Shahbazi, chief executive of Info Touch Technologies, a company in Burnaby, British Columbia, that supplies hardware and software for the Exxon Mobil, Circle K and Sunoco programs and others. "They’re getting all this pressure from the Wal-Mart’s of the world, and they’re trying to respond."
The Circle K and Exxon Mobil machines are far more basic than 7-Eleven’s Vcoms, which have been called overengineered. Several dozen customers polled informally outside a 7-Eleven in Winter Springs, Fla., recently said that they had never used the Vcom inside, and one woman who said she did use it once to withdraw cash complained that it was "confusing" and "complicated," and added that she would not use it again. 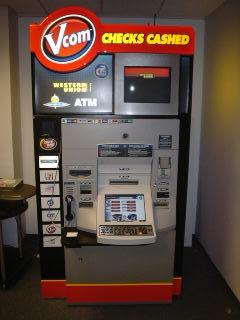 "There were just too many steps," said the woman, Peggy Baker, who teaches French in Winter Springs. "And the $1.75 transaction fee was too much–it was painful." She said she was not interested in the other Vcom features, which require users to enroll and enter a Social Security number on a touch screen.
But several customers using a bill payment kiosk in a Cingular Wireless store in Astoria, Queens, last month raved about the ease and convenience of the terminal, even though they had to pay a $2 fee and round their total up to the nearest dollar, because the terminal did not accept coins. The kiosk, supplied by Info Touch Technologies, is the same type used by Exxon Mobil and Circle K; clerks in the Cingular store said that at least 50 people a day used the machine–more on weekends–and that the only time it malfunctioned was when it was too full of cash to accept any more.
"I use it all the time to pay my bills; it’s pretty good," said Daisy Borges, who works in the linens department of a home accessories shop near the Cingular store and who dropped in to pay her $39.99 monthly Cingular phone bill during a lunch break.
Borges said she used to mail a check to pay the bill, but switched to using the kiosk three months ago. "It goes faster, it works better," she said. "I’m pretty sure that my money goes to the right people."
And the $2 fee? Borges shrugged and said, "Nothing is free in New York."
At convenience stores, companies have found the kiosks make business sense. If a machine is handling a money transfer or a bill payment, no cashier is involved in the transaction–which typically involves $200 or so in cash–reducing the likelihood of employee theft and freeing clerks to handle other transactions. And when people come in to a store deliberately to pay a bill or withdraw cash, they may well be tempted to pick up a soda and a sandwich. In addition, the customer gains privacy and may be able to avoid a separate trip to pay a bill. "What most companies are looking at it for is to drive new customer traffic as opposed to driving revenues from the specific kiosks," said Jeff Lenart, a spokesman for the National Association of Convenience Stores, a trade group.

It is difficult to pinpoint how much extra revenue the terminals generate in incremental food and product sales, Lenart said, but the idea is to get people to start changing their habits so that they shift their bill-paying or other chores to a convenience store from elsewhere.
"What is very exciting is to see a brand new person come in and use the machine and see how easy it is," said David Taylor, category manager for store services for Exxon Mobil, which began installing eWiz bill pay terminals in Memphis in 2004. "Some of those folks may take a bus to a bill payment center, and now they find they can just go down to the corner and pay their bills. It has made their lives easier."
But it is not just people without bank accounts who use the kiosks. ChoicePay, the company that executes the bill payments for the Vcoms at 7-Eleven, has also installed several bill payment terminals of its own in some supermarkets in Tulsa, where ChoicePay is based. Those terminals typically handle 1,500 to 2,000 bill payments a month–85 percent of them paid in cash–and 55 percent of the customers do have checking accounts, said Greg Adelson, ChoicePay’s president.
"At 7-Eleven, what we have seen is that the number of transactions has continued to increase and the average size of the transaction has continued to increase," Adelson said. "That could be utility bills going up, but it might be an indication that people feel comfortable putting that much money into a kiosk and getting instant credit" for the paid bill.
The goal of the Vcom program is to make 7-Eleven a major financial services brand, said Rick Updyke, vice president for corporate business development. Plans call for the installation of Vcoms in all 5,400 domestic 7-Eleven stores and for the imminent addition of a feature that will let customers make deposits to any bank account, which Updyke said would be "the first step in making the Vcom a branch bank or financial institution."
Other retailers, as well as banks, have taken heed. Exxon Mobil has so far installed 77 eWiz terminals but plans to make eWiz "a standard program at all our facilities," Taylor said. The biggest challenge, he said, is to get a critical mass of billers to sign up in a given market, so it will take some time before eWiz is ubiquitous.
Exxon Mobil also plans to add functions to the terminals, which charge $3 for a bill payment. Soon eWizzes will handle money orders and sell prepaid phone cards, among other things, Taylor said.
Circle K’s Zaplink terminals already offer bill payment (also for $3) and Web browsing, so that customers can check e-mail. One day they will offer money orders, cell phone top-ups and a menu of other products and services, said Dan Stiel, manager of financial services for Circle K. But the stores’ ATM’s are unlikely to be retired anytime soon.
The machines attract "two different audiences and two different expectations in terms of speed," Stiel said. Someone eager to withdraw cash from an ATM does not want to stand in line behind someone paying an electric bill, and the person paying the bill does not want to feel pressured to hurry, he said.
In choosing locations for Zaplink terminals, Circle K deliberately picked areas in Arizona, Texas, Florida and other states with high immigrant populations, with the idea that immigrants would be less likely to have bank accounts and more likely to relish a convenient option for paying bills. And in some 7-Eleven stores where there are high immigrant populations, Spanish is the top language option on the machine.
Lenart of the convenience store trade group said he tried a Zaplink terminal in Phoenix, paying $3 for Internet access and using it to create a video postcard of his infant son. "I thought it was really cool," he said.
But the idea does not appeal to all convenience store companies, Lenart said. He said he was promoting Zaplink’s virtues to an executive from the Wawa chain, which is based near Philadelphia. "He said: ‘It doesn’t work for us. Our customers don’t want to find out that they can’t get a parking space because there’s a couple of people surfing the Internet. They don’t want to have to walk down a different aisle because there are a couple of people clustered around a kiosk.’ "