When Gold Coast girl Amy Dutton heard that her school friend had been turned down for a career in automotive because it was "men’s work", it made her that much more determined to succeed in her chosen career of carpentry.  Here are some amazing photos of women working construction jobs.

Today Amy is a successful third-year carpentry apprentice with Gold Coast Institute of TAFE, comfortable in a hard hat and tool belt, and revels at the idea of creating with her hands each day.
"I’ve always liked making things, "Amy said.
"At first I thought about cabinet making but realised after some work experience that it didn’t give me enough scope to be creative. I was more interested in building houses.

"I actually wanted to be part of an international care team that rebuilds disaster stricken regions around the world, but obviously I had to learn to be a carpenter/builder first.
"Eventually I think I’d like to either own my own construction company or at least become a builder.  I plan to enrol in the Diploma of Building at Gold Coast TAFE once my apprenticeship is complete," she said.
Amy says she would like to see more girls in the construction industry, but believes that like many of her own friends, generally girls do not seriously consider a career in trades because it’s manual work.
"My own friends congratulate me for my career. They think it’s pretty cool that I’m a carpenter but I enjoy the work-I like not having to handle customers and I can be left to my work."
The only tip Amy gives to other girls thinking about non-traditional careers is to ‘don’t be afraid, just believe you can’.

"I find that generally men on the worksite are friendly and treat you like anyone else, but sometimes it can be awhile before they get over the fact that you’re female.
"Unfortunately, the only resistance I find sometimes comes from the older men on site who still believe that this type of work is for boys only, but you just get on with it and they come round," she said.
According to Employment, Training and Industrial Relations Minister Tom Barton, the numbers of females in non-traditional trades had been slowly growing in recent years, with numbers increasing from 1256 in 1999 to 1712 in 2004, an increase of 36.3 per cent.
"The Queensland Government has long campaigned and encouraged the greater involvement of women in the building, construction and general trade areas of employment," Mr Barton said.
"Apprenticeships can lead to satisfying and rewarding careers-they provide many more career pathways than they did years ago and the job outcomes from apprenticeships are better than those of most degree graduates."
"I believe people today choosing a career in building and construction can look forward to a lifetime of opportunities for success."
Mr Barton said the Government’s campaign of encouragement had also resulted in a steady rise in the number of women enrolling at Gold Coast TAFE in the traditionally male-dominated areas of building and construction is steadily rising.
"This year 19 female students had enrolled in architectural drafting and diploma of building programs," he said. 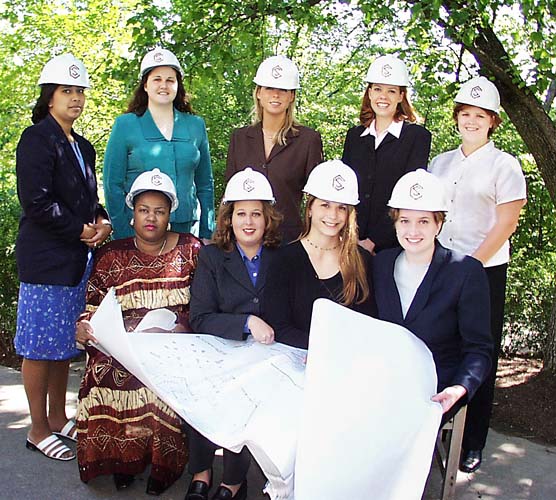