Researchers in the United States and France believe ultra thin layers of graphite, or graphene, may be the basis for new electronic devices.

A new class of material, which brings computer chips made from a single molecule a step closer, has been discovered by scientists.

Called graphene, it is a two-dimensional, giant, flat molecule which is still only the thickness of an atom. 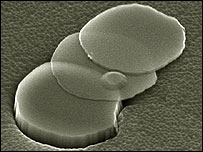 The nanofabric’s remarkable electronic properties mean that an ultra-fast and stable transistor could be made.
The physicists from the University of Manchester and Chernogolovka, Russia, published their research in Science.
"In my opinion, this is one of the most exciting things to have happened in solid state physics in a decade," Professor Laurence Eaves, semi-conductor expert from the University of Nottingham, UK, told the BBC News website.
Graphene is part of the family of famous fullerene molecules, discovered in the last 20 years, which include buckyballs and nanotubes.
Their unusual electronic, mechanical and chemical properties at the molecular scale promise ultra-fast transistors for electronics, as well as incredibly strong, flexible and stable materials.
Ballistic promise
Scientists have been trying to exploit this for computing because smaller transistors mean the distances electrons have to travel become shorter, meaning faster speeds.

Conventional transistors rely on the semi-conducting characteristics of silicon which provide the switches that change the flow of current in computers and other electronics.

"All the recent progress has been on nanotubes for transistors. These are sheets of graphite molecules wrapped in a cylinder – like a chocolate cylinder you stick in your ice cream," explained Professor Laurence Eaves.
"Although these are interesting, because they are one-dimensional, they have limitations. Graphene is a plane transistor – flat sheets."
Professor Andre Geim, who leads the research team, explained that the material they had discovered could be thought of as millions of unrolled carbon nanotubes which had been stuck together to make an infinitely large sheet, an atom thick.
They showed that electrons could travel sub-micron distances without being scattered, which means fast-switching transistors.
"At the moment, the research is in early stages," Professor Geim said.
"The applications are too early to say, but the material is incredible. We have studied its electronic properties and no other material displays this."
He added: "People have been trying to make transistors faster and smaller. There is a Holy Grail of electronics that engineers call ballistic transistors – ultimately faster than anything."
A ballistic transistor is one in which electrons can shoot through without collisions, like a bullet. In other words, it has what is called a long mean free path – the distance a molecule travels without colliding into another.
Greater distances with nothing to collide with means faster speeds. Fewer collisions means less energy is lost, too.
Although they have not demonstrated a ballistic transistor yet, the latest experiments have shown that the new material could, in theory, produce one.
The team is currently experimenting with relatively small sheets of the graphene nanofabric, 10s of microns (millionths of a metre) across, but the sheets are still "large" in molecular terms.
The nanofabric would have to be produced in much larger wafers, a few centimetres in area, before electronics manufacturers could start using it.
But, said Professor Geim, judging by how quickly carbon nanotubes developed, graphene could be ready for industrial application in about 10 years.

In work at the Georgia Institute of Technology and the Centre National de la Recherche Scientifique, researchers have found electron transport properties comparable to those in carbon nanotubes.

We have shown that we can make the graphene material, that we can pattern it, and that its transport properties are very good, said Walt de Heer, a professor in Georgia Tech’s School of Physics.
De Heer cautioned that practical applications are likely to be a decade away. But he said graphene nanotubes can be produced using established microelectronic techniques, making high-volume production likely.
0