NASA scientists say they have reached a breakthrough in computer modeling, allowing the simulation of gravitational waves from merging black holes.  Amazing photos.

Astronomers said the three-dimensional simulations — the largest astrophysical calculations ever performed on a NASA supercomputer — provide the foundation to explore the universe in an entirely new way.
Previous simulations were plagued by computer crashes since the necessary equations, based on Einstein’s theory of general relativity, were far too complex. But scientists at NASA’s Goddard Space Flight Center in Greenbelt, Md., found a method to translate Einstein’s math in a way that computers can understand.
These mergers are by far the most powerful events occurring in the universe, with each one generating more energy than all of the stars in the universe combined. Now we have realistic simulations to guide gravitational wave detectors coming online, said Joan Centrella, head of the Gravitational Astrophysics Laboratory at Goddard.
The work was detailed in the March 26 issue of Physical Review Letters and will appear in an upcoming issue of Physical Review D.

Below are some amazing illustrations of black holes. 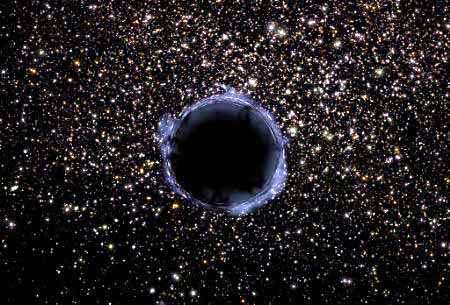