China’s Three Gorges Project is the largest water conservation project in the world. Taking the total amount of concrete work as one example, the Three Gorges Project totals 26.43 million cubic meters, 2.5 times the figure for the Gezhouba Barrage project and twice that of the Itaipu project in Brazil, which is currently the largest water conservation projects in the world.  Amazing photos.

The idea of building a gigantic dam in the Three Gorges area to harness the Yangtze River is not new. More than seventy year ago, Dr. Sun Yat-sen, pioneer of the Chinese democratic revolution, first proposed that a Yangtze Three Gorges Project be constructed. Later, numerous experts conducted investigations on and preparatory work for the project. But because of historic reasons and lack of resources, the development of the project remained only a dream. Since the founding of the People’s Republic of China in 1949, the project was back on the agenda. After meticulous feasibility studies by experts, it was finally concluded that the merits of the project far overweigh its demerits. On April 3, 1992, the National People’s Congress approved the construction of the project. The Three Gorges Project has its main benefits in flood control, power generation and navigation.

Historically, the population in the middle and lower reaches of the Yangtze River suffered tremendous losses from flooding both in human lives and property. In 1931 alone, as a result of flooding, 333 thousand hectares of cultivated land were stricken, 145 thousand people were drowned.

With its total installed capacity of 18,200 MW, the Three Gorges Hydropower Station will generate 84.7 billion KWH a year, one-ninth of the national total generated power.

Thirdly, the project will enable 10,000-ton towboats to sail up-stream as far as Chongqing. The Yangtze navigation capacity will thus be increased from 10 million to 50 million tons a year with the cost lowered by 35%-37%. 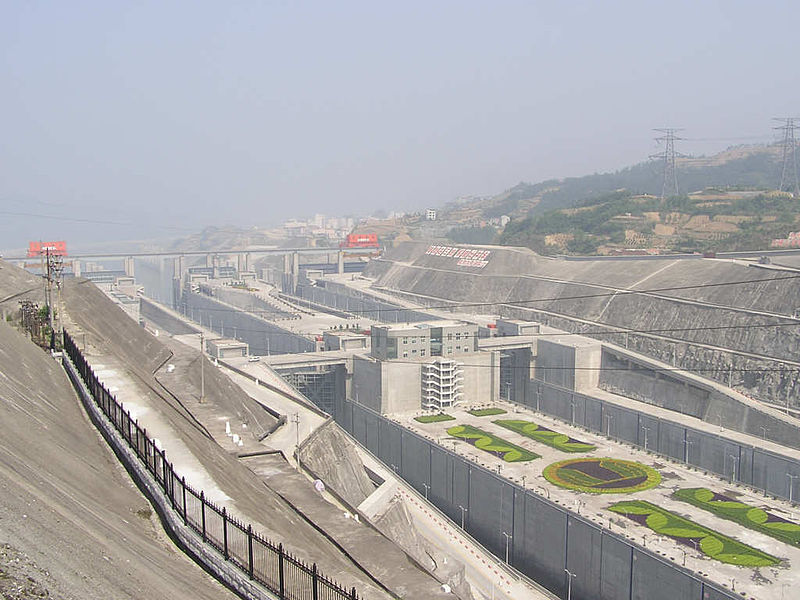 Ship locks in use