The finding of a parrot with an almost unparalleled power to communicate with people has scientists coming up short explaining this one.

The bird, a captive African grey called N’kisi, has a vocabulary of 950 words, and shows signs of a sense of humour.
He invents his own words and phrases if he is confronted with novel ideas with which his existing repertoire cannot cope – just as a human child would do.
N’kisi’s remarkable abilities, which are said to include telepathy, feature in the latest BBC Wildlife Magazine.
N’kisi is believed to be one of the most advanced users of human language in the animal world.
About 100 words are needed for half of all reading in English, so if N’kisi could read he would be able to cope with a wide range of material.
He uses words in context, with past, present and future tenses, and is often inventive.
One N’kisi-ism was "flied" for "flew", and another "pretty smell medicine" to describe the aromatherapy oils used by his owner, an artist based in New York.
When he first met Dr Jane Goodall, the renowned chimpanzee expert, after seeing her in a picture with apes, N’kisi said: "Got a chimp?" 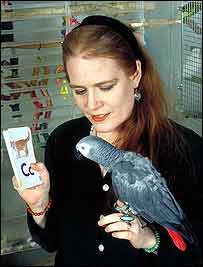 He appears to fancy himself as a humourist. When another parrot hung upside down from its perch, he commented: "You got to put this bird on the camera."
Dr Goodall says N’kisi’s verbal fireworks are an "outstanding example of interspecies communication".
In an experiment, the bird and his owner were put in separate rooms and filmed as the artist opened random envelopes containing picture cards.
Analysis showed the parrot had used appropriate keywords three times more often than would be likely by chance.
This was despite the researchers discounting responses like "What ya doing on the phone?" when N’kisi saw a card of a man with a telephone, and "Can I give you a hug?" with one of a couple embracing.
Professor Donald Broom, of the University of Cambridge’s School of Veterinary Medicine, said: "The more we look at the cognitive abilities of animals, the more advanced they appear, and the biggest leap of all has been with parrots."
Alison Hales, of the World Parrot Trust, told BBC News Online: "N’kisi’s amazing vocabulary and sense of humour should make everyone who has a pet parrot consider whether they are meeting its needs.
"They may not be able to ask directly, but parrots are long-lived, and a bit of research now could mean an improved quality of life for years." 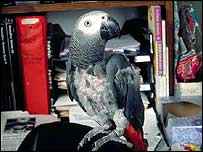