Prince Henrik of Denmark told Ud & Se magazine: “Dog meat tastes like rabbit. Like dried baby goat. Or perhaps – I know! – like veal. Like the veal of a baby suckling calf, only drier.”
The 72-year-old Prince, the husband of Queen Margrethe, is the honorary president of the Danish Dachshund Club, reports the Times.
He developed an appetite for dog-bone stew and other canine delicacies at an early age. He grew up in Vietnam, where roast dog remains a speciality.
“I’ve got no qualms about eating dog meat,” he said. “These dogs are bred to be eaten, just like chickens.”
The Prince is rarely seen without his dachshunds. He has said that he would like to be reborn as a dachshund in the Danish Court. And he has advised parents “to bring up children like dogs”.
Danes recall a tabloid-fuelled drama in the 1990s, when one of the royal dachshunds disappeared.

“In the light of the Prince Consort’s confessions, perhaps we should reopen the case of the disappearing dachshund,” Mats Jørgensen, an architect and cat owner, said. 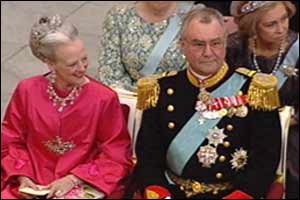