Canadian Melissa Vatkin has joined thousands of couples flocking to the United States to cash in on the disputed luxury of being able to dictate the sex of their next baby.

Parents from around the world are forking out around 19,000 dollars for a groundbreaking gender selection treatment offered by only a handful of US clinics but banned in most countries.
The high-tech method of resolving the ancient question of "Would we prefer a boy or a girl?" has raised ethical concerns and fears that it could worsen an already worrying gender imbalance plaguing countries such as China and India.
But for couples like the Vatkins, pre-implantation genetic diagnosis, or PGD, which proponents boast gives parents a 99 percent certainty of delivering a baby of the sex of their choice, the procedure is a godsend.
"This treatment has allowed us to realise our dream," said 36-year-old Vatkin, who recently gave birth to her fourth child, a pre-selected girl.
"We were desperate to have another girl and our daughter really wanted a sister," said Vatkin, who also has a six-year-old daughter and two boys, aged four and two, with her husband Shawn, an oil company owner.
"It was important for us to balance our family," added the resident of British Columbia.
Family balancing is the refrain heard from most of the 2,000 couples who have sought the help of fertility expert Doctor Jeffrey Steinberg, who became a pioneer in the field of commercial gender selection about three years ago.
"Usually these couples have four of five children of one sex and desperately want one of the opposite sex, they want to balance their families in a way that works for them," Steinberg told AFP.
For more than two years, the Vatkins, children in tow, made the 2,100-kilometer (1,300-mile) pilgrimage from their home to Steinberg’s Fertility Institute in Los Angeles in a bid to overcome their fertility problems and to ensure that when the baby did come, it would be a girl. 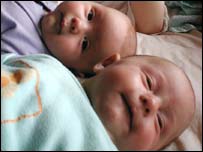 Other couples come from much further afield. More than 50 percent of the couples that come to Steinberg for help are from outside the United States.
Would-be parents from territories such as China, Hong Kong, Singapore, Thailand, Japan, Germany, Britain and Canada are flocking to Steinberg’s Los Angeles and Arizona clinics.
"They come from everywhere that it’s banned by law," Steinberg said. "But in the United States we really guard and cherish reproductive choice and we are very reticent to allow the government to impinge on that."
Using techniques made possible by the discovery of the human genome, eggs are removed from the mother after she undergoes fertility treatment to multiply them and are fertilised with the would-be father’s sperm in a laboratory dish.
One of the cells in each embryo is then removed to allow scientists to determine from its DNA whether the embryo is male or female, before one of the desired gender is implanted into the mother’s womb to gestate.
But some bioethicists say the technique could aggravate gender imbalances in some communities and could be the start of a slide towards designer babies and cloning if parents are ever able to pre-select their children’s hair colour or personal talents. 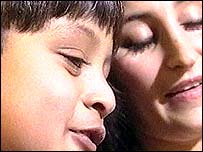 In countries such as China and India, boys are culturally favoured as first children, abortions of foetuses following amniocentesis gender tests and even infanticide have combined to see a huge decline in the birthrate of girls.
"In some places, the impact for sex ratios would be pretty dramatic if people had the complete power to chose the gender of their child," said Stamford University bioethicist David Magnus.
He however stressed that because PGD was an expensive and complex technique, it was unlikely to be widely used either in the developing world or even in the United States.
But there may be a risk of creating a culture of perfectly-planned "designer babies," he warned.
"With new technology, there are fears that we may be heading towards a future where only the poor are fat or bald, that we are heading towards creating a genetic underclass and genetic overclass," Magnus said.
The process also rings alarms bells among conservative Christians amid concerns over the fate of unused embryos left over in the process, since many believe human life begins when the embryo is formed.
But Steinberg dismisses the three-pronged criticism of the gender selection process.
He stresses that his clients mostly opt to keep fertilised eggs in his eggbank rather than discard them. He said the technique was more humane than the current trend of aborting foetuses or dumping female babies in India and China.
Overall, his clients were divided evenly over which sex they would prefer for the baby. Americans and Canadians favour girls, Indians and Chinese want boys, and Latin Americans are split down the middle.
Steinberg also denied that the technique was the start of a trend towards designer babies or even human cloning.
"We are not moving in the direction of designer babies or cloning at all," he said. "People have been warning of that slippery slope since the first in-vitro baby was born more than 25 years ago, but we haven’t gone down it yet."
For the Vatkins, critics’ fears are overplayed.
"This treatment really is miraculous for couples like us and especially for those who have, say, three girls and really want a boy," Melissa Vatkin said. "A lot of people don’t agree, but then they shouldn’t do it."
0