Cuban President Fidel Castro has furiously denied a story in Forbes magazine that claimed he was worth $US900 million ($1.18 billion) and has said he will step down if the magazine can prove the assertion.

The US-based financial magazine ranked Castro as the seventh-wealthiest ruler in the world in its annual tally of the "Fortunes of Kings, Queens and Dictators".

Castro went on television brandishing a copy of the magazine to tell Cubans the story was a "repugnant slander" by a capitalist publication.
With communist Cuba’s central bank governor at his side, Castro challenged Forbes to prove the allegation.
"If they can prove that I have a bank account abroad, with $900 million, with $1 million, $500,000, $100,000 or $1 in it, I will resign," he said at the end of a four-hour broadcast.
"It is so ridiculous to say I have a fortune of $900 million, a fortune with no heirs. What would I need all that money for, if I will soon be 80 years old?"

Kings and sheiks of the oil-rich Gulf Arab states still top the Forbes list, published in the magazine’s May 22 edition.
Castro ranked higher than the Queen.
Her fortune, according to Forbes, amounts to $658 million in estates, gems and a stamp collection built by her grandfather, but not Buckingham Palace or the crown jewels. The British monarch came to the throne in 1952, seven years before Castro seized power.
Castro last year threatened to sue Forbes after the magazine included him on its 2005 list with an estimated fortune of $550 million.
The Forbes estimate includes state enterprises that the magazine assumes he controls in Cuba, among them the Havana Convention Centre, the Cimex retail conglomerate and a pharmaceutical company that exports vaccines. 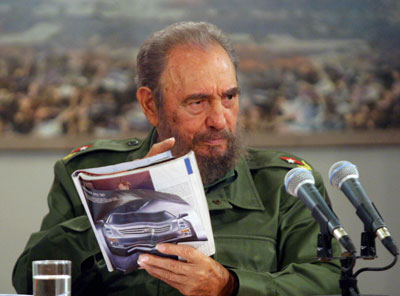 Forbes said it assumed that a portion of the profits of state companies went to Castro and cited rumours of money stashed in Swiss bank accounts. It gave no details but said former Cuban officials insisted Castro had skimmed profits for years.
Central bank governor Francisco Soberon said the Forbes story was a "poisonous lie" fabricated by US intelligence services that have worked for decades to discredit Castro.