New York City Mayor Michael Bloomberg suggested a plan on Wednesday that would establish a DNA or fingerprint database to track and verify all legal U.S. workers.

Republican Mayor Michael Bloomberg thrust himself into the national immigration debate Wednesday, advocating a plan that would establish a DNA or fingerprint database to track and verify all legal U.S. workers.

The mayor also said elements of the legislation moving through Congress are ridiculous and said lawmakers who want to deport all illegal immigrants are living in a "fantasy."
In an editorial for The Wall Street Journal and two nationally televised interviews, the mayor reiterated his long-standing belief that the 12 million undocumented immigrants in the United States should be given the opportunity for citizenship, saying that deporting them is impossible and would devastate the economy.
Aides said Bloomberg believes his views are relevant because he has a rare perspective as a former businessman who ran a company for two decades before he became mayor, in charge of enforcing the laws in a city with an estimated half-million illegal immigrants. They said that the editorial was his idea and that CNN and Fox News approached him to discuss his views on the air.
In the article and on air, Bloomberg slammed lawmakers who want to deport all illegal immigrants, saying on Fox News that "they are living in a fantasy world."
Asked in that interview whether his opinions put him at odds with his political party, the mayor, a former Democrat, shot back: "With which party?
"I’m not a partisan guy," Bloomberg said. "I am a mayor who has to deal with 500,000 people who are integral to our economy but are undocumented."
Bloomberg compared his proposed federal identification database to the Social Security card, insisting that such a system would not violate citizens’ privacy and was not a civil liberties issue. 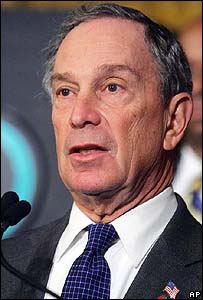 "You don’t have to work _ but if you want to work for a company you have to have a Social Security card," he said. "The difference is, in the day and age when everybody’s got a PC on their desk with Photoshop that can replicate anything, it’s become a joke."
The mayor said DNA and fingerprint technology could be used to create a worker ID database that will "uniquely identify the person" applying for a job, ensuring that cards are not illegally transferred or forged.
Donna Lieberman, director of the New York Civil Liberties Union, said a DNA or fingerprint database "doesn’t sound like the free society we think we’re living in."
"It will inevitably be used not just by employers but by law enforcement, government agencies, schools and all over the private sector," she said.