A police chief sparks controversy today by suggesting the number of rapes in Scotland could be substantially reduced if women drank less.

Neil Richardson, assistant chief constable of Lothian and Borders Police, bases his claim on new research which identified victims’ alcohol consumption as significant in a third of attacks.

The senior officer said "a lot" of the 1,100 rapes a year could be prevented "by people not allowing themselves to be in a vulnerable position".
Richardson – who stressed he was not blaming women – spoke out after a study of more than 120 rapes revealed alcohol intake was a major factor in 40 cases.
Detectives concluded that the women were more likely to be targeted in the first place and less able to prevent the attack.
Even though 13 of the 124 women claimed their drinks had been spiked with "date rape drugs" the research found no evidence of any such substances having been used.
Richardson said: "In many cases the women reported being victims of date rape drugs but analysis shows it was far more likely they have just fallen victim to alcohol."
He added: "We know that drink reduces inhibitions and we take more chances, therefore we can make an assumption about the vulnerability that goes with that.
"I do think a lot of these attacks could be prevented by people not allowing themselves to be in a vulnerable position.
"People need to be sensible and take precautions. If there’s a suggestion that people might not have been victims if they’d had their wits about them or had friends with them, that’s significant.
"We are doing a lot of work to ensure that the services we deliver to the victims are the best they can be. That should not be mistaken for blame going towards the victim. We do not tolerate crimes of this nature."
The police report, An Analysis of Reported Serious Sex Crime in Lothian and Borders, is the first of its kind in Scotland and investigated the circumstances of rape cases between June 2003 and May 2004.
It found that 54 of the 124 victims had drunk alcohol before the incident. Most of them had drunk more than five units, the equivalent of five small glasses of wine or two-and-a-half pints of beer. 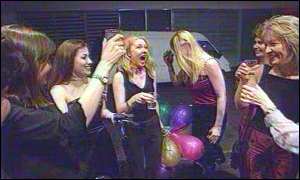 In 40 cases, officers investigating the assault said they believed the victim’s alcohol or drug-taking was a "significant factor in the fact they were targeted".
Officers believed that in 33 cases, alcohol had affected the victim’s ability to resist the attack and in 34 cases it affected their ability to avoid the assault altogether.
But rape support and alcohol workers insist women should be able to drink without fear of being attacked.
Sandy Brindley, national co-ordinator of Rape Crisis Scotland, warned that Richardson’s comments might make women reluctant to come forward if they are attacked while drunk.
She said: "Women should be able to drink and not worry about being raped. Far too often reports of rapes focus on the woman’s behaviour and the perpetrator becomes invisible."
A spokeswoman for Alcohol Focus Scotland added: "Men are also drinking too much and this can lead to them pushing further than they would normally go as their inhibitions are down and there may be more bravado."

Kenny MacAskill, the SNP’s justice spokesman, also insisted that women should not be blamed for being sexually attacked while drunk. He said: "’No’ should always mean ‘no’, whether someone has been drinking or otherwise."
Experts fear that the growing binge-drinking culture amongst Scottish women is now making it easier for sexual predators to find victims.
Around 10% of women drink more than 35 units of alcohol per week, more than twice the accepted safe limit of 14 units. Nearly two-thirds of young adults have got so drunk that they suffered memory loss during the past fortnight.
In Edinburgh, on Friday night, a hen party expressed alarm at the figures unveiled in the police report.
Samantha Emery, 31, admitted it was easy to get into risky situations after drinking too much. She said: "It is so easy to be taken advantage of, particularly if the men have had too much to drink.
"Some of my friends think it is now safer to meet people over the internet than it is in a nightclub."

Elsewhere in the city, a 25-year-old woman, who asked not to be named, told how last year a friend woke to find a man she met in a nightclub sexually assaulting her.
Although the friend had taken the man back to her flat, she had refused to have sex with him before passing out from too much drink. When she came to, she found she was being raped but was too afraid to stop it, unable to recall if she had consented while intoxicated.
"She can’t remember exactly what happened as she had drunk too much and she didn’t go to the police as she thought they wouldn’t take her seriously," said the woman. "It has made me realise how dangerous drinking too much can be."
Last year the number of alleged rapes and attempted rapes jumped 7% to 1,109, a record high. But official figures show that Scotland’s conviction rate for rape is now around 5%, one of the lowest in Europe.
Prosecuting rape cases involving alcohol has become a particular problem as victims can often not remember giving consent or even having intercourse.
In Scotland there are two separate reviews underway by the Scottish Law Commission and the Crown Office, into the way sexual offences are dealt with by the legal system and the levels of proof required.
Last night a spokeswoman for Zero Tolerance demanded that more be done to ensure sex attackers who target drunk women are brought to justice.
She said: "Perpetrators are very methodical. If they go for a woman under the influence of alcohol not only will she be easier to target but if she ends up in court and says that she had been drinking there’s less chance of him being brought to justice."