The biggest online travel company in China ¡ª C-trip conducted an online survey about "airline consumption" recently, which showed that most people in China tended to be more rational when buying tickets as they only chose their favorite flight types and air companies.
Most of the respondents indicated that they would take airplane types into consideration, for example, Boeing 747 with wide bodies being their prior choice. Some said large planes seemed more secure than smaller ones, while others believed they felt more comfortable in large ones. 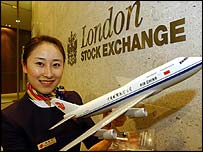