In Shanghai, the women wear the pants, or so the saying goes. Not that the city’s women are particularly masculine or coarse, it is just that their men have an age-old reputation for being, well, a little on the soft side.

The "little men of Shanghai" have been derided for years in folk tales, novels, theatre and, more recently, in films, television dramas and, most mercilessly on the Internet. Invariably, they are depicted as henpecked husbands who willingly subject themselves to a life of servitude at the beck and call of their wives.
Now, Shanghai men are fighting back. No, they are not seeking to overthrow the rule of the wives. They are, instead, trying to teach their fellow countrymen a thing or two about family harmony. The message: Men should listen to their wives.
Hauling two plastic bags full of fresh vegetables and meat from a neighbourhood market, Shao Zhenhua, a 30-something marketing manager for the Shanghai Film Centre, which runs a downtown multiplex, says he "loves" cooking and washing at home. Doing the housework is part of his "family tradition," the young executive said proudly.
Historical reasons
Of course, doing the chores is also very much symbolic, said Lan Huaien, a prolific writer and public commentator on social issues and gender studies in Shanghai. "It is a way for Shanghai men to show how much they love and cherish their wives," she said. That, she added, is what sets Shanghai men apart from those in the rest of the country.
Lan and other scholars trace the origin of the "little Shanghai men" to the late 19th and early 20th century, when exposure to foreign influence brought dramatic changes to the social and economic fabric of Shanghai while the rest of China remained in the clutches of feudalism. These changes in Shanghai fuelled rapid growth in the service sector, which, in turn, created a strong demand for women workers.
As a result, Shanghai women joined the workforce and gained financial independence long before women in other parts of China. In those early years of development, there were more jobs available in Shanghai for women than for men. In many Shanghai families, the women were the breadwinners.
In one of her books, Lan wrote that women are usually better-suited for jobs in the traditional service industry. The woman’s role in the family changed because it was often easier for them to find jobs than the men; a phenomenon that seems to hold true even today.
Ask Paul Pan, a 27-year-old junior executive at a foreign owned company. "My wife is a successful advertising company executive," he said. "She has no time for cooking and other household chores," he added. So, Pan is the one in the family doing all those duties. Besides, "my wife is a terrible cook," he said.
Showline Chang, a psychologist with a PhD from a US university, said Shanghai men learn to show more respect and care for their spouses by observing their parents when they are growing up. To the average Shanghai man, "it is never a matter of right or wrong," she said. "It is just the right thing to do." Pan said he used to feel rather embarrassed when colleagues from outside Shanghai made fun of his "deference" to his wife. "They think I am a wimp," Pan said. Slamming his fist on the table in a coffee house, Pan declared: "I am not a wimp. I am just not boorish like the rest of them."
A widely read commentary, "Oh! Shanghai Men," published in several newspapers in Shanghai in 1990, further strengthened the stereotype. The article was written by Lung Yintai, who made a name for herself on the Chinese mainland as a strong critic of the Taiwan authority.
Zhang Yu, a renowned local pianist who divides her time between Shanghai and Paris, sighed that "’hen-pecked-ness’ is actually politeness to the female."
She believes that in Western countries doing chores has never been equal to being henpecked. "Partly because of the colonial history, Shanghai men have learnt the courtesy of Western gentlemen and show more respect to women."
She jokingly added that men from other parts of China are only rude about Shanghai men because they are jealous of their fortune in having Shanghai women whom they consider to be arguably the "best" women in China as their wives.
James Dai is a Chinese Canadian who emigrated to Toronto, Canada, five years ago. He has returned to China and is now a senior architect with a renowned property developer in Shanghai.
"As far as my knowledge goes, at least 60 per cent of the decision to buy a house is made by the woman in the family."
Dai admitted that he sometimes asks for advice from his wife for his designs. After all, he said, women are the decision makers.
This is a view interior designer Yu Kuai confirms.
Yu, senior designer for the Shanghai Modern Architecture & Design Company, said that at least 70 per cent of the time it is the women in a family who have the final say on how to decorate a new apartment.
"Women are very concrete in their thoughts. They will directly tell you which colour they like, however, their husband will analyze the wife’s favourite, and explain it to the designer. Sometimes the husband will offer two similar colours for designers’ consideration," he said.
The only things a husband will get to decide on, said Yu, are the electric wires and pipes.
"Women definitely have a dominant impact on the design of the bathroom, for the colour and pattern of the ceramic tiles and the brand of toilet, but the husband will ask how the pipes are laid," Yu said.
Yu concludes that the most frequently asked questions by husbands are "price, the material for floors and electricity safety."
When it comes to the traditionally male topic of cars, the situation is a bit different.
Chen Yixuan, a marketing executive for Shanghai VW Corp, said the final decision on which car to buy will only be made after a thorough discussion between husband and wife.
"Usually, the main priority for both husbands and wives is price. But after that, wives care more about colour, appearance and comfort while husbands are more concerned with horsepower, functions and interior gadgets."
In the VW range, Chen said, women generally prefer the compact Polo, while men go for the larger Passat.
Singaporean co-founder and Web designer of wow-her.com, Lydia Yan, now lives in Shanghai.
Singaporean men are also sometimes branded with the "henpecked" label, she said, something they have learned to shrug off.
"Shanghai men are more savvy, polite and well-mannered than Singaporean men, generally speaking. Shanghai men have their own appeal just as Singaporean men do," she added with a smile.
According to Yan, "hen-pecked-ness" or eagerness to please a woman, is all part of the attraction of Shanghai men. 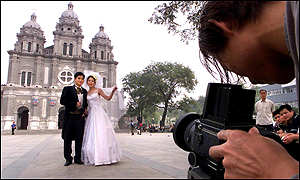 "For some women, that is the most charming part of a man," she said.
Han Lei, a Shanghai local government official who is engaged by the stereotype, was eager to defend himself.
"The misunderstanding of Shanghai men comes from narrow-minded people. We Shanghai men not only know the importance of supporting the family financially, but we also know the importance of emotional support and always show consideration to our wives."
A viewpoint academic Lan agrees with: "Shanghai men like to show they care for their wives and families. However, they can be embarrassed to admit it because they think they will be ridiculed if they do," she said.
Rumour has it that Lung once admitted her "Shanghai Men" piece was supposed to praise rather than ridicule the thoughtfulness of men in the city.
Unfortunately, instead of helping rehabilitate the reputation of Shanghai’s men, the misunderstanding of her compliments as sarcastic mockery added to the weight of prejudice against them.
But Internet impresario Lydia Yan believes times are changing and while Shanghai men may appear in thrall of their wives, they are no wimps when it comes to sorting out their differences with other males.
"Shanghai men have a kind of street-smartness," she said. "They know how to deal with disrespect from so-called real men from elsewhere in China."