While sex in space is now a front and center topic of talk in public space travel circles, it may be far more complex and foreboding than once thought.

More research is needed in the role of gravity and its impact on the human body, said James Logan, a veteran NASA space physician speaking at the gathering – but voicing his personal views.

“Sex in micro-g might be a little underwhelming. That is, the fantasy might be vastly superior to the reality. It’s a pretty messy environment…for every action there’s an equal and opposite reaction,” Logan told an attentive audience over the weekend at the NewSpace 2006 meeting in Las Vegas, Nevada, sponsored by the Space Frontier Foundation.
Sex in zero-g is going to have to be more or less choreographed, “otherwise it’s just going to be a wild fling,” Logan advised. But for those looking forward to space migration and setting up self-perpetuating civilizations off-Earth, the space physician raised several warning flags.
After the 26th gestational week of fetus development, lack of gravity delays skeletal development necessary for sitting, standing and walking, Logan said. Building adequate and proper neural connections after birth – requires movement under gravity, he added.
And after 3.8 billion years, everything on planet Earth has changed, Logan noted, except for one constant: gravity. 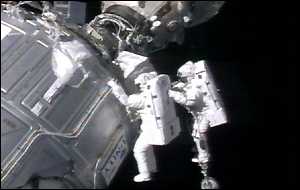 “In my opinion,” Logan continued, “the prospect of doing a single jump from 3.8 billion years of one-gravity into some kind of a weightless civilization is extremely naïve.”
In the 45th year of human spaceflight “we still do not have an inkling of what the gravity prescription is,” Logan said. “Think of gravity as a medication. We don’t know the dose. We don’t the frequency. And we don’t know the side effects.”
For the long term, the tall pole in the tent is life sciences research, Logan observed, including more work on radiation protection, as well as space structures that produce artificial gravity. He advised that space “pioneering” should be replaced with “bioneering”.