Where do you go to find a beautiful piece of Mother Nature without having to contend with all the crowds?  Here is a list of great places that the rest of the world has somehow forgotten about.

If you prefer to visit with magnificent Mother Nature in (near) solitude, you’ll find your favorite crowd-free national parks in the US and Canada every bit as dramatic as the big headliners, yet agreeably free of the usual mobs. We’ve laid out the details on how to take in the grandest of canyons from a little-known access point, and have proposed two further options in America’s heartland: a park boasting lunar-like landscapes and verdant prairies and another with one-of-a-kind vistas of sweeping sandstone arches. Tree-huggers will relish their seclusion at two ancient forests on both coasts, while water-lovers will delight in untamed Texan rafting adventures, snorkeling at an underwater Floridian marine park, or whale-watching on a Canadian cape. The more remote you go, the more likely you are to find that elusive solitude; to that end, we also highly recommend an archipelago dubbed the “Canadian Galapagos” and an island park home to the world’s tallest volcano and the Hawaiian goddess Pele.
Arches
Arches National Park, one of a quintet of stunning Utah national parks, may not attract the same number of visitors as the state’s more-accessible Zion or Bryce Canyon parks, but its surreal terrain of towering sandstone arches makes this Southern Utah wilderness wonderland one sensory experience not to be missed. Two particular arches reign supreme over the 2000-plus that dot the scene: Delicate Arch, a lone-standing arch whose likeness also embellishes Utah license plates; and the slender 300-feet-high Landscape Arch, the largest in the park.

Situated in southwestern South Dakota, the Badlands National Park marries mixed-grass prairies with pinnacles, spires, canyons, and otherworldly buttes of varied colors and shapes to create a lunar-worthy landscape. The product of millions of years of erosion and deposits, this geological anomaly has the Sioux to thank for its name; they called it mako sika or "land bad,” in reference to how difficult it was to cross. Modern-day visitors will be relieved to know that a nicely paved road now connects the park’s nine scenic overlooks, trailheads, and visitor’s center.

Big Bend
For a wild ride, thrill-seekers should raft down the unruly Rio Grande, the 118-mile-long river winding along the southern boundary of Big Bend National Park, one of America’s largest and least-visited national parks. Although named for the substantial bend in its roaring river, most of Big Bend’s acreage actually consists of arid desert expanses, giant canyons, and the Chisos mountain range – a terrain that has disgorged superb fossil specimens of ancient plants and dinosaurs. Biscayne
Dive in and explore the ocean floor at this unique aquatic national park. The largest marine park in North America (at about 173,000 acres), Biscayne lies just 25 miles from Miami and sits on part of the world’s third-largest coral-reef system. Most of the park is accessible only by boat (kayak, canoe, or motorized tour); scuba diving and snorkeling excursions will help you get up close to the abundant underwater life.

Cape Breton Highlands
Alexander Graham Bell, Cape Breton’s famous resident, once said "I have traveled around the globe. I have seen the Canadian and American Rockies, the Andes, the Alps and the Highlands of Scotland, but for simple beauty, Cape Breton outrivals them all." His praise surely extended to the national park occupying its northern edges that’s home to the illustrious Cabot Trail. The park’s rugged coastline, forested plateaus, canyon views, and verdant highlands are marvelous to behold, as are vistas of frolicking whales and soaring bald eagles. Congaree
Tree-huggers rejoiced at the founding of Congaree National Park, a 22,200-acre terrain that earned its national stripes as recently as 2003. Located about 20 miles from Columbia, South Carolina, this recent newcomer preserves the largest tract of old-growth floodplain forest in the whole of North America – giant hardwoods, lofty pines, and bald cypresses are just some of the roughly 75 species of ancient trees that form one of the world’s highest natural canopies. Not surprisingly, the incredible biodiversity generated here has earned the park due rank as an International Biosphere Reserve.

Grand Canyon – North Rim
Millions of visitors from around the globe descend on the Grand Canyon each year to try and wrap their minds around its seemingly infinite reach – to do so in relative solitude, head to the canyon’s North Rim instead. Despite being located just 10 miles from the South Rim (and its popular Grand Canyon Village), the North Rim is that much harder to reach that few visitors do – those that do go the extra mile (or 215 in this case, by car) will be rewarded with serenity and an unblocked view of one of Mother Nature’s most stupendous creations.

Gwaii Haanas
Although only 3000 visitors reach this virtually untrammeled park each year, this magnificent archipelago off the coast of British Columbia is arguably one of the most beautiful and diverse landscapes in all of North America. Home to abundant wildlife – in fact, the island chain is often referred to as the “Canadian Galapagos” – the area is also the ancestral home of the Haida, a Pacific Northwest tribe whose rich culture and settlements is still visible here. Towered over by the glacier-sculpted peaks of the San Christoval Mountains, and home to beautifully carved totem poles and old log-house villages amidst massive old pines, this pristine wilderness is only accessible by boat or float plane.

Hawaii Volcanoes
It’s not all sand and surf on Hawaii’s Big Island. This hot spot (geologically speaking, at any rate) also finds fiery lava flowing from the mouth of one of the world’s most-active volcanoes at Hawaii Volcanoes National Park, where the daunting Kilauea regularly spews molten 2100-degree lava that reshapes the landscape as it gushes down into the Pacific. Not to be outdone, the world’s tallest volcano, Mauna Loa, is also found here, rearing up 13,677 feet from below sea level. The 11-mile-loop Crater Rim Drive provides a dramatic overview of the scene; do stop at the Halemaumau Crater Overlook to peek into the bubbling lava-filled home of Pele, the Hawaiian volcano goddess. 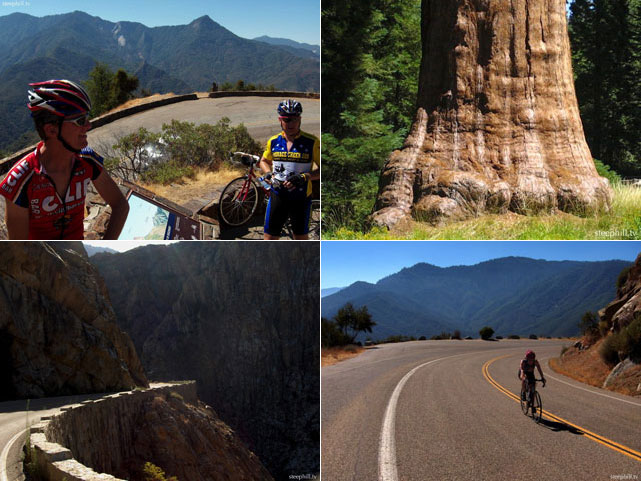 Sequoia and Kings Canyon
Sequoia and Kings Canyon national parks, two California parks co-managed by the National Parks Service, are often overshadowed by hugely popular Yosemite, but hard to overlook all the same. Dominated by the Sierra Nevada range, whose peaks shelter the headwaters of three rivers, diverse wildlife, and of course, the park’s eponymous groves of massive sequoias, this “land of giants” – so-called for the sheer size of the trees, which can reach heights of over 300 feet and widths of 30 feet – includes the aptly named Giant Forest, where you’ll find the 2200-year-old General Sherman Tree, the largest tree on earth.