Researchers say they have come closer to unlocking the secrets of earthquake prediction by uncovering a link between tiny, almost imperceptible, tremors deep inside the earth and devastating quakes capable of wiping out cities.

Key to the find are so-called silent earthquakes that move so deeply and gradually that they produce no seismic waves. But they are dangerous because they build up pressure on the upper layers of the earth’s crust, which eventually give way in violent snaps.
A three-year joint project by the University of Tokyo and Stanford University has found a way of accurately mapping the epicenters of these minuscule pre-quakes, researcher Sho Nakamula, of University of Tokyo, said Wednesday. The results, published earlier this month in the journal Nature, could lead to improved earthquake prediction and help save lives.
"Monitoring these silent earthquakes is important to forecasting big earthquakes later," Nakamula said.
Silent earthquakes were only recently discovered, and until now, scientists found it difficult to pinpoint their hypocenters and determine their exact triggering mechanism. The new research more accurately pinpoints those details by linking silent earthquakes to another kind of deep-earth tremor, the low-frequency earthquake, which can last as long as a couple hours.
By monitoring low-frequency quakes, scientists can more precisely determine where silent earthquakes are building up pressure and where big earthquakes are likely to erupt — with important consequences for quake-prone places like Japan or California.
The research is a step toward predicting big earthquakes because it precisely locates the origin of low-frequency quakes and silent quakes, said Kazushige Obara, a scientist at Japan’s National Research Institute for Earth Science and Disaster Prevention, who did not participate in the study, but discovered the existence of low-frequency quakes in 2002.
"But it still doesn’t show the exact relationship between the slow tremors and huge earthquakes," he said.
Two areas studied by the researchers include the Nankai Trough off the Pacific coast of the Japanese island of Shikoku and the undersea trough off the Pacific coast of the U.S. states of Washington and Oregon.
The Nankai region is rocked by giant earthquakes about once a century, with the last one — an 8.2 magnitude giant — striking in 1946 and killing about 1,400 people. The Japanese government says there is an 80 percent chance of another killer quake of similar size striking the region in the next 50 years. Any fine tuning of the forecast would be a breakthrough.
The Pacific Northwest is another hotspot, a zone that has seen several 7-magnitude and stronger quakes in the last century and where a 9-magnitude quake is estimated to hit and trigger devastating tsunamis once every 400 to 600 years.
The last quake of that force struck the area in 1700.
The trans-Pacific project, started in 2002, was led by geoscientists Greg Beroza and David Shelly at Stanford and Satoshi Ide at the University of Tokyo.
While the results shed new light on how low-frequency earthquakes can be used to predict dangerous temblors, more research is needed to determine the what causes the low-frequency quakes and corresponding silent quakes to begin with, Nakamula said. 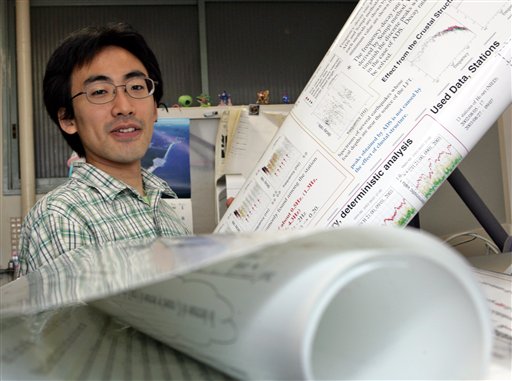 Sho Nakamula, a researcher of University of Tokyo, displays charts at his lab in Tokyo Wednesday. A three-year joint project by the University of Tokyo and Stanford University has now for the first time found a way of accurately mapping the epicenters of tiny, almost imperceptible, tremors deep inside the earth. "Monitoring these silent earthquakes is important to forecasting big earthquakes later," Nakamula says.