Increased efforts are being made to tackle commercial bribery in China’s ongoing anti-corruption campaign.

Li Yufu, vice-minister of supervision and deputy head of a central government task force plans to crack down on commercial corruption, saying such activities of graft taking "disturb the normal political and economic order, and infringe upon people’s interests."
He added they also tarnished the country’s image.
At a press conference yesterday in Beijing, the Ministry of Supervision official reported that, between August 2005 and June this year, Chinese anti-corruption officials investigated 6,972 cases of alleged commercial bribery, involving a total of 1.96 billion yuan (US$241.7 million).
Li said 1,603 of these cases, altogether worth 508 million yuan (US$62.6 million), involved public servants.
Of the officials who have been punished, 49 were at or above city level, and 367 at county level, he added.
Among them was Zhang Quan, former vice-director of the communications department in North China’s Hebei Province, who was given a 14-year prison sentence in February for taking bribes of more than 1.8 million yuan (US$221,900) between 2001 and 2004.
In a sector-by-sector breakdown, Li said that graft cases mainly centered around six major business areas including 1.) approvals of building projects, 2.) land rights transactions, 3.) property rights transactions, 4.) buying and selling of medicine and medical products, 5.) government procurement orders, and 5.) exploitation rights of land resources.
6.) Anti-corruption officials also exposed problems in bank credit policies, securities and futures, insurance, publishing, sports, power supply, quality inspection, and environmental protection, the official said.
All of these areas accounted for 5,480 of the alleged corruption cases, or 78.6 per cent of the country’s total. 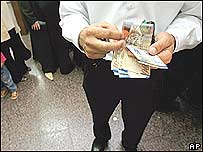 The Ministry of Supervision also publicized yesterday the results of investigations into 15 major bribery cases. The most serious offence concerned Wen Mengjie, former head of the technology division of the Beijing branch of the Agricultural Bank of China.
Wen was convicted of raking in 10.73 million yuan (US$1.34 million) from equipment and software providers and seizing 4.32 million yuan (US$540,000) of public money during his time as division head.
He was sentenced to death last month, and the ruling is still undergoing a routine review at the Supreme People’s Court.
Efforts to crack down on commercial bribery, according to Li, have been complex for anti-corruption officials. "There are still many fields where the current law and regulations have a lack of definition of corruption and the corresponding punishment," Li said.