A Chinese family planning official has said the government will still punish people who intentionally abort baby girls even though the legislature decided in June not to make it a crime, state media reports.

The Xinhua News Agency quoted Zhang Weiqing, an official with the State Commission for Population and Family Planning, as saying that the government would continue to prosecute institutions and individuals involved in illegal sex-selective abortions.

Xinhua said late Tuesday that the government has prosecuted 3,000 cases of fetus gender identification and selective abortions for non-medical reasons over the past two years, without giving details.
China does not currently outlaw abortions to select a child’s gender. However, a family planning regulation prohibits the practice except for medical reasons. The regulation does not spell out punishments.
A three-decade-old policy limiting most couples to one child has made abortion a widely used method for controlling family size.
As a result, and due to a traditional preferences for sons, China faces a growing population imbalance, with many more boys than girls. 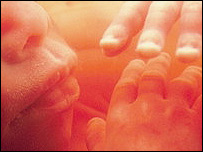 In China 113 boys are born for every 100 girls, while globally the average ratio is about 105 boys to 100 girls.
In June, China’s legislature scrapped an amendment to the criminal law that would have banned abortions based on the sex of the fetus.
Xinhua said that some lawmakers argued that it would be too difficult to collect evidence for prosecution and that pregnant women should have the right to know the gender of their unborn child.
Family planning experts and some legislators have argued that the lack of clear criminal penalties has encouraged the use of abortions by families who want a son.