What could be more mundane than supermarkets? In the world of upgrading everything: many products and services are, actually! After WholeFoods re-defined an entire industry in the US, now MPreis, a chain of supermarkets in western Austria, is taking the trend one step further. Billing itself as "The Seriously Sexy Supermarket", the company’s stores literally stand out because of their unusual and progressive architecture.

MPreis has been commissioning up and coming architects for the last fifteen years, encouraging them to design buildings that make the most of their settings in the Tyrolean Alps. Which is in stark contrast to most chain retailers, who find a formula and repeat it, regardless of location.
A keen eye for aesthetics continues inside the stores, which feature sleek cafÃ©’s and carefully chosen materials. And the experience goes beyond design – MPreis also understands the value of storytelling, emphasizing that the company is family-owned, and was founded by an entrepreneurial woman (Frau Therese Mölk) in the 1920s.
Surprisingly, price levels at MPreis aren’t higher than at competing supermarkets in the region. Although award-winning design comes at a slightly higher cost than generic structures, the buildings look more expensive than they are.

The key of the matter is that everything can be upgraded, and creating a richer customer experience doesn’t necessarily require raising prices. Plenty of opportunities for big-box retailers across the world to become patrons of good architecture and bold design! 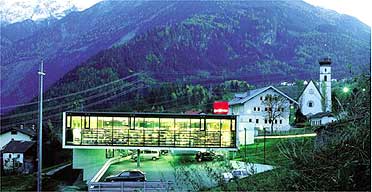