China’s gender imbalance is so serious that millions of men will not be able to find wives a decade from now.

If current birth ratios were to continue, between 2015 and 2030 there will be 25 million men in China with no hope of finding a mate, according to a study issued by France’s National Institute of Demographic Studies in October last year.
However, the program "Care for Girls" offers hope that the imbalance can be righted. The program launched by the State Population and Family Planning Commission (SCPFP) in 2003 in 24 pilot counties provides social benefits, including cash payments, to families with only girls, in order to boost the status of girls and women.
The program is credited with reducing the boys-to-girls ratio in those counties from 133.8/100 to 119.6/100 over the past three years.
The SCPFP will now extend the program to all provincial regions.
In Wuwei County, in east China’s Anhui Province, a 38-year-old peasant woman named Ding Xiufang burst into tears when her 12-year-old daughter called her "mom" for the first time.
In 1994, Ding and her husband asked Ding’s mother to bring up their daughter because the couple were eager to have a boy and were too poor to look after two children at the same time.

When Wuwei County was selected for the first trial of the "Care for Girls" program in 2003, the county family planning committee provided Ding with funds to grow food and vegetables at home while her husband received a four-wheel vehicle to transport goods.
Two years after the program was launched, the couple had fought their way out of abject poverty and have now built a two-storey house beyond their wildest dreams. They brought their daughter home and fitted out a study for her, allowing the girl to finally experience parental love.
There are echoes of Ding’s story throughout Wuwei County. A family with one or two girls will receive 30,000 yuan (3,750 U.S. dollars) worth of subsidies before the girls are married, including aid funds, education assistance and exemptions.
In rural China couples are allowed to have a second child if the first one is a girl.
Even if the notion of "ladies first" is increasingly accepted in Chinese cities, the saying "raising a daughter is like watering someone else’s fields" is deep-rooted among people in rural China. Traditionally, elderly peasants could only depend on their sons.
Wang Jianhui, a farmer with two daughters in Fengming town, Qishan County, in northwest China’s Shaanxi Province, no longer worries about his old age. The local government has provided Wang and his wife with an endowment insurance which will pay them 1,200 yuan (150 U.S. dollars) every year after they turn 60. 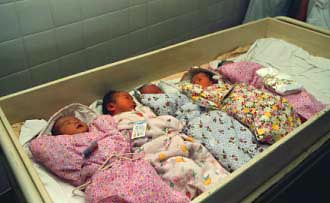 "I never imagined daughters could bring me such benefits," Wang said.
Some parents used to abort the wife’s pregnancy if tests showed the fetus was female so that they could try again for a boy. As a result, there are 119 boys born for every 100 girls in China, an imbalance much higher than the global ratio of 103-107 boys for 100 girls.
Only seven out of 31 provincial regions report a gender ratio below 110 boys to 100 girls and boys under the age of nine outnumber girls in the same age group by 12.77 million.
To curb the male-dominated gender imbalance, the Chinese government initiated the "Care for Girls" program and has beefed up efforts to fight sex selection abortion.
China has prosecuted 3,000 cases of fetus gender identification and selective abortion for non-medical purposes over the past two years.