The prototype designed by students in the University of Arkansas’s college of engineering contributes to research into a commercial product that could prevent death due to heat stroke.
Deaths due to heat stroke are preventable with new technology, said Tom Costello, associate professor of biological and agricultural engineering. Trainers and coaches on the sideline need to know whose body temperature is creeping up there (to a dangerous level).
For their senior design project, students Matt Graham, John Leach and James McCarty designed and built the system prototype that can wirelessly gather and monitor body temperature on many players in real time.
To the player practicing or participating in a game, the system would be transparent in that it would not compromise safety or affect comfort and performance.
The device is embedded into the interior surface of a football helmet. A sensor adhering to a pad touches the player’s forehead and records the body’s temperature from the temporal artery. 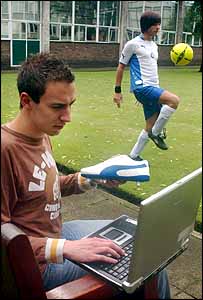