Single male (red hair, long arms, interests include hanging in trees and grooming) seeks female for long-distance relationship and possibility of meeting up in future to help save species.

Zookeepers in the Netherlands are planning to hook up Dutch and Indonesian orangutans over the Internet and believe the link could at some stage be used as an online dating service where apes could get to know one another and keepers could work out whether they would be compatible mates.
First things first: A romantic dinner for two.
"We are going to set up an Internet connection between Indonesia and Apeldoorn so that the apes can see each other and, by means of pressing a button, be able to give one another food, for example," said Anouk Ballot, a spokeswoman for the Apenheul ape park in the central Dutch city of Apeldoorn.
She said the chance of two orangutans actually mating as a result of the online interaction was small due to the problem of transporting them between the Netherlands and Indonesia. "But I wouldn’t rule it out completely," she told The Associated Press.
Ballot said the primary aim of the computer link between Apenheul and an orangutan center on the Indonesian part of Borneo was to raise public awareness of the apes and their plight. Activists say that the spread of palm oil plantations, coupled with logging, especially on Malaysian and Indonesian territories on Borneo island, is threatening animals such as wild orangutans with extinction by chewing up their native jungle habitat.
Ballot said that, in the past, captive orangutans separated by a wall have communicated with one another via a mirror placed in front of the two enclosures. Using webcams and computer screens is an extension of that, she said.
She stressed that only orangutans who show a natural interest and aptitude will take part. The Apenheul park has 13 orangutans among its collection of apes.
There is still work to be done to set up the Internet connection. "We need to find ape-proof cables and screens," Ballot said, adding that the zoo hopes to have the orangutans online by the end of this year or early 2007.
So next time you run into someone in a chatroom and think "what a baboon," think twice: it just might be. 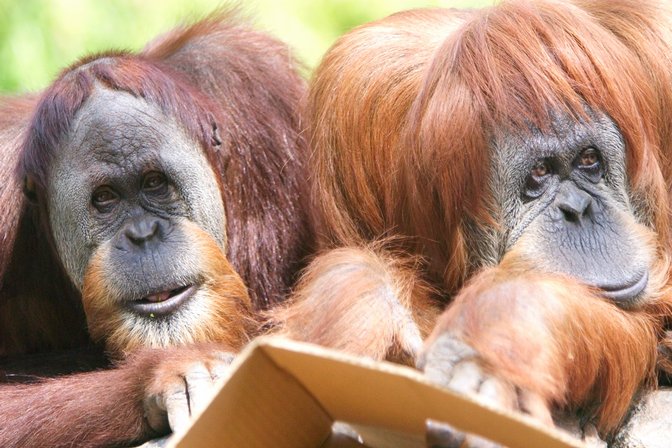