A year ago, an American city almost drowned. As New Orleans slowly sank beneath the brackish floodwaters unleashed by Hurricane Katrina, the nation watched in horror and wondered what the future held for the dying city. A year later, New Orleans is in the midst of a halting, sloppy recovery. But it is recovering, despite dire predictions last September that the city was gone and admonitions that it should not be rebuilt.

New Orleans taught the nation that cities don’t easily die. Nor, it turns out, do they change much.
Take the levees, for example: Their shoddy construction led to the flooding after Katrina, and they are mostly fixed now. But teams of engineers monitoring the reconstruction say they are not markedly improved and still cannot hold back the waters of a Category 5 hurricane.
Crime, an unfortunate New Orleans trademark, is the same if not worse than it was before Aug. 29. The economy remains the question mark it has been since the 1980s oil bust. And all across the city, homeowners are rebuilding homes the old way, in harm’s way, because the city and the state have not yet said they can’t.
Many problems persist because there’s no master plan for the city’s future. There’s no prohibition on rebuilding in places that have always been vulnerable to flooding — and still are. In some neighborhoods, the real planning is happening inside people’s homes, around the kitchen table or in small neighborhood groups.
Absent from the rebuilding is a vision for New Orleans as a whole, a way to use this tragedy — and the city’s portion of $27 billion in federal rebuilding money earmarked for Louisiana — to transform a city that was decaying for decades before the storm hit.
Most people say they just want to rebuild what they had. "People just want to get back to where they were before the storm," says Tim Ryan, chancellor of the University of New Orleans.
"My fear is the city is coming up with a plan that is all repair, with no dreams for the future," says David Voelker, a member of the Louisiana Recovery Authority, which has as much as $7 billion in federal dollars waiting for New Orleans to come up with ways to spend it. This is in addition to the $7 billion in grants to homeowners that begin flowing in September.
There will be some major changes. A city whose population drops by half — from 460,000 pre-Katrina to about 200,000 now — is going to be different, no matter where the remainder choose to live. And the school system, wrested by the state from a dysfunctional local school board just weeks after Katrina, is getting a major overhaul and could become a national model for charter schools. This fall, at least 20,000 students are expected to attend 52 schools, 32 of which will be charters.
"Cities do come back from tremendous devastation," says Lawrence Vale, an urban expert from the Massachusetts Institute of Technology. "But resilience means bouncing back, and that’s not the same as bouncing forward. The forces of pre-disaster inertia are very powerful, for the good and for the ill."
Last Aug. 29, Katrina, a Category 5 hurricane packing 160-mile-an-hour winds, weakened significantly as it made landfall in Plaquemines Parish. It then skirted the city and decimated Mississippi’s Gulf Coast with a 28-foot storm surge. New Orleans, it seemed briefly, had dodged a bullet.
Then something happened, something worse than any storm. Levees along city drainage canals and the Mississippi River crumbled at multiple points, sending water rushing into the city and surrounding parishes. More than 100,000 of 188,000 households in New Orleans were swamped by at least four feet of water, some by as much as 12 feet. All but 50 of St. Bernard Parish’s 27,000 homes flooded.
House Speaker Dennis Hastert, R-Ill., caused a small storm when he wondered about the wisdom of rebuilding a flood-prone city. He suggested, in an interview with an Illinois newspaper, that a lot of New Orleans "could be bulldozed."

In fact, it turned out that the small but essential heart of the city — including the French Quarter, much of the downtown business district and the Garden District — was spared any flooding, and the rest was dry in a matter of weeks. By October, power and water were restored to many unflooded neighborhoods. Pioneering residents began to return, many living in the dark, traveling out of town for groceries and gas. The population struggled back to about 100,000 by Christmas. 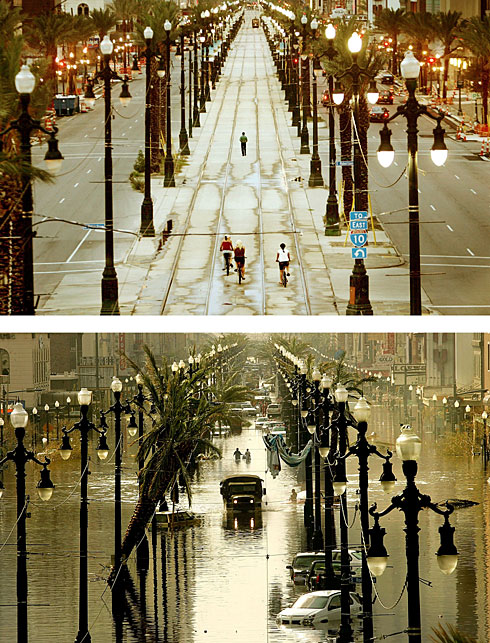