Latest Census numbers are in.  Here are the places with the highest concentration of college degrees.

If you equate education with intelligence, then the smartest city in the United States is Seattle – 52.7 percent of its residents age 25 or older have completed a bachelor’s degree or higher.

The education rankings were released this month by the U.S. Census Bureau.
Seattle’s also been ranked as the most literate city in the United States by Central Connecticut State University, beating out Minneapolis, Washington and Atlanta. That rating was based on such things as the number of booksellers, libraries and newspaper circulation – as well as educational attainment.
Many brainy people have flocked to the Seattle area to work in what’s called the "knowledge economy."
Companies headquartered there and in surrounding towns, including Microsoft, Amazon, Cray, Washington Mutual and Costco, all use heavy doses of information technology. Even another of the area’s biggest employers, old-line Boeing, is also a glutton for technological solutions.
Seattle also has more than its share of residents with advanced degrees: 20.5 percent. Only Washington, D.C., has more holders of advanced degrees. Many there work for the federal government, as well as for the think tanks and other nongovernmental organizations that form the heart of capital’s working culture.
For many twenty-first-century cities, knowledge drives what Andrew Beveridge, Queens College sociology professor, calls the "super service economy."
Cities in general are better positioned than rural areas to attract knowledge workers. The advantages can vary from an abundance of high-tech or other employers who require highly educated workers to cultural facilities and recreational opportunities. 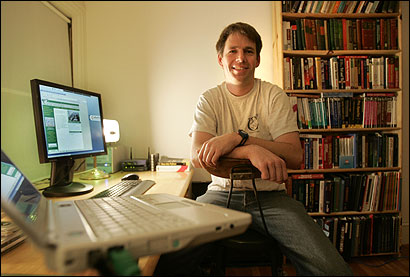 Second to Seattle for the percentage of residents holding bachelor’s degrees is San Francisco, a center for high-tech and financial services.
Raleigh, N.C., with its amalgam of great research universities and high-tech companies, tied San Francisco for second place for holders of bachelor’s degrees and was seventh for advanced degrees, with 16.7 percent of residents holding one.
New York cracks the top 25 list at No. 20 and is No. 19 for advanced degrees. For Manhattan alone, however – the center of New York’s knowledge economy – the percentage of residents with bachelor’s degrees is a whopping 57.5, and the figure for advanced degrees is 26.9 percent.
Manhattan is a prime example of the kind of urban area that has become a magnet for young college grads, according to Beveridge. The types of industries thriving there, he says – Wall Street, publishing and television production, advertising – all require highly educated workers.
But New York also draws educated young people for its performing and fine arts, museums, street life, professional sports teams and other cultural assets.
San Francisco has many of these same strengths, and, like New York, it is a culturally and ethnically diverse city that welcomes people with alternative lifestyles, the so-called creative class. This group is made up of artists, musicians and writers and includes gay men and "bohemian" types.
Richard Florida, who developed the creative-class concept (the efficacy of which remains controversial), advises that attracting these groups pays off better for cities than building large-scale industrial developments or municipal building projects.
Simply put, smart people like to live in cool places, and cities are trying to oblige. Pittsburgh is building biking trails. Providence has established a weekly "Waterfire" festival that runs from May to October. Cleveland built a museum dedicated to rock ‘n’ roll.
Although it might be debated which comes first, an educated population or a successful economy, there is little doubt that the two are closely entwined; wealthy places tend to have well-educated populaces.
In the United States, the five most-educated major municipalities all qualify among the 25 cities with the highest median household income. Seattle for example, is the eighth-wealthiest city in the nation measured by household income. San Francisco is the fourth.
The wealthiest city, San Jose, is also the among the 15 best educated. As your mom always said, to get a good job, get a good education.
City – State – Percent