A robot chat machine so life-like many people are fooled into thinking it’s human has become the latest internet sensation.

The world’s most sophisticated "chatbot" – invented by British scientists – can talk on the internet with hundreds of different people at the same time, but each person has the impression that it is only talking to them.
Nicknamed George, it is programmed to show emotions, tell jokes, answer questions and engage in intimate conversation on subjects as varied as love, life and the universe. It can speak 40 languages as its vocabulary continues to improve.
George’s inventor, Rollo Carpenter, who will put his creation on show at the British Association Festival of Science this week, said: "He talks in a way that is as close to human as you can get without actually being human.
"A lot of people really do think they are talking to another person."
George, who started chatting online in 1997, has had text conversations with nearly two million people across the globe. 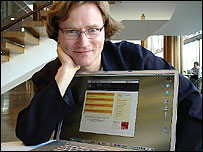 Rollo Carpenter has high hopes for Jabberwacky
Jabberwacky lives on a computer hard drive, tells jokes, uses slang, sometimes swears and can be quite a confrontational conversationalist.
What sets this chatty AI (artificial intelligence) chatbot apart from others is the more it natters, the more it learns.
The bot is the only UK finalist in this year’s Loebner Prize and is hoping to chat its way to a gold medal for its creator, Rollo Carpenter.
The Loebner Prize is the annual competition to find the computer with the most convincing conversational skills and started in 1990.
Jabberwacky will join eight other international finalists in October, when they pit their wits against flesh and blood judges to see if they can pass as one of them.
It is the ultimate Turing Test, which was designed by mathematician Alan Turing to see whether computers "think" and have "intelligence".
Jabberwacky says it is human, although it is many things to different people because of the way it is learning to be human.
It tries to model the way humans learn language, facts, context and rules.
"It is not just male and female. It will claim variously to be an alien, various animals and any number of inanimate objects," Mr Carpenter told BBC News Online.
But he is confident it will beat the other bots, if the conversational skills of the human judges are up to scratch.
"I certainly believe Jabberwacky can win, but my chances will be best if the judges talk in an entirely free-flowing and natural manner, and judge the resulting conversation not based on individual answers, but as a whole," he said.
Judges chat via computers to humans and the finalists, without knowing who is who, then decide which is the most human-like.
The coveted gold medal and Grand Prize of $100,000 goes to the bot which completely fools the judges. The "most human" program each year wins a prize of $2,000 and a bronze medal.

Jabberwacky was "born" in 1989, but its first incarnation was as a conversational program hard-coded on a Sinclair ZX81 back in 1982.
"I was a self-taught teenager programmer, now known as a geek, and possibly needed a bit of communication," Mr Carpenter explains.
It has evolved since then. While most others are programmed by rigid sets of rules defining how it communicates, Jabberwacky is more complex and learns from thousands of online conversations with humans.
"Nothing is hard-coded, nothing is fixed, and it changes slightly, on its own, every day. Jabberwacky doesn’t have just one personality, and to a reasonable degree, tends to reflect the users back to themselves.
Indeed, it can sometimes come across as quite sarcastic, not necessarily answering questions correctly because of what is has picked up from past discussions.
It acts as a huge mosaic mirror of human personality, which might be why people start believing it is human. If you ask a stupid question, it may well give you a stupid answer.
By studying chat logs, Mr Carpenter has noticed that some people, particularly the young, believe AIs are entities in their own right.
They talk to the bot with respect, showing compassion and understanding, he says.
"I once found a user had evidently left their browser window open for weeks, and said more than 20,000 things."
Mr Carpenter’s vision for the future of bots is ambitious and does not involve using them in computer support systems which many imagine.
Instead, learning bots like Jabberwacky would be better used for entertainment, and keeping people company, especially when it gets its own voice.

"One day, hopefully soon, Jabberwacky will switch from text to voice, which will suit its AI techniques to a tee.
"It will then start to have a home in physical objects, little robots that are a talking pet."
A more appealing visions perhaps than that of a cheesy, walking, talking, human made infamous by AI, Steven Spielberg’s 2001 film.
"If I have my way, people will be walking around, sitting, cooking and more with one on their shoulder, talking in their ear."