The image of the super-svelte Frenchwoman has taken a battering after a new survey showed more than a third are overweight.

In all, the study found that 19.8 million people out of the country’s population of 63 million were too fat, and that 5.9 million of them were obese – 2.3 million more than nine years ago.
"Women appear to be more affected than men," said Professor Arnaud Basdevant, a Paris hospital nutritionist who jointly co-ordinated the study.
"Women’s waistlines are certainly expanding the fastest," he added.
The survey revealed that, rather than following in the slender tradition of a young Brigitte Bardot, more than a third of French women are overweight. Far too many drink to excess, with one in 30 consuming enough to be classed as an alcoholic.
More than half of Frenchwomen are thought to be at serious risk from overeating, smoking or drinking.
Last year the bestseller French Women Don’t Get Fat ‘explained’ how a bit of common sense combined with a moderate intake of calorie-filled delicacies could ensure a perfect figure.
Its author, Mireille Guiliano, 60, claimed that traditional French ways of choosing and preparing food ensured good health and figure.
The reality, however, is that McDonald’s and Burger King are now regular features of towns and cities across France.
Family meals are being replaced by supermarket ready dinners. Even Miss Guiliano has admitted that her book’s title may have to be revised. 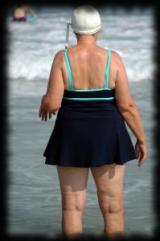 "Of course some French women get fat," she said. "I find it obscene, frightening, that France has one of the largest number of McDonald’s outside America.
"Even in France there are now homes without a dining table. People sit in front of the TV with junk food, saying they are too busy to prepare meals.
"But you can make a lovely carrot soup in 20 minutes. It’s a 21st century trap. People work more, have less time and there’s prepared-food galore – full of sugar, salt and preservatives." The latest study, titled ObEpi 2006, was carried out by TNS Healthcare Sofres, between January and March. A cross-section of 23,747 aged over 15 were interviewed.
In all, it found that 12.4 per cent of the population is now obese, compared to 11.3 percent in 2003 and 8.2 per cent in 1997.