The average American home now has more television sets than people. That threshold was crossed within the past two years, according to Nielsen Media Research. There are 2.73 TV sets in the typical home and 2.55 people, the researchers said.

With televisions now on buses, elevators and in airport lobbies, that development may have as much to do with TV’s ubiquity as an appliance as it does conspicuous consumption. The popularity of flat-screen TVs now make it easy to put sets where they haven’t been before.
Rick Melen, a facilities manager, has three sets in the Somers, N.Y., home he shares with his wife. That doesn’t count the bathroom set that broke down and hasn’t been replaced or the speakers installed near their hot tub, allowing them to watch a wide screen set through a window.
“It’s really just a matter of where your living takes place, what rooms you tend to spend your time in,” Melen said on Thursday. “Other appliances you can move from room to room but if you have cable, you can’t move a television.”
His wife might want to watch something while she’s cooking while he’s got a baseball game on downstairs, he said.
Half of American homes have three or more TVs, and only 19 percent have just one, Nielsen said. In 1975, 57 percent of homes had only a single set and 11 percent had three or more, the company said.
David and Teresa Leon of Schenectady, N.Y. and their four-year-old twins have seven sets, plus an eighth they haven’t set up yet. They include TVs in both the parents’ and kids’ bedrooms, the family and living rooms and one in the kitchen that is usually turned to a news station.

“No one ever sits down for more than a few seconds in this house,” said Teresa, a stenographer. “This way you can watch TV while you’re moving from room to room, folding laundry or taking care of the kids.”
In the average home, a television set is turned on for more than a third of the day _ eight hours, 14 minutes, Nielsen said. That’s an hour more than it was a decade ago. Most of that extra TV viewing is coming outside of prime time, where TVs are on only four minutes more than they were 10 years ago.
The average person watches four hours, 35 minutes of television each day, Nielsen said.
While people are watching more television, ratings for the big broadcast networks have declined steadily. That’s a function of the greater number of channel choices available in each home, the company said. 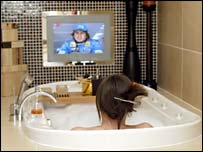 One new Nielsen finding _ that young people aged 12 to 17 watched 3 percent more television during the season that ended in May than they had the previous year _ is a particular relief to TV network executives.
For a few years, Nielsen had been finding that TV viewing among teenagers was flat or even declining, a trend blamed on the Internet or the popularity of electronic games and other devices.
“There are just more opportunities for them to watch whatever they want to watch,” said Patricia McDonough, Nielsen’s senior vice president of planning policy and analysis.
Oddly, one of the driving factors is teenage girls watching more TV late at night or early in the morning, she said. 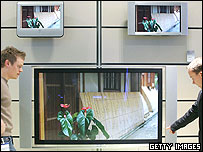