Britain’s cocaine crisis is hitting workplaces across the country, with record numbers of employees now testing positive for the class A drug. New figures reveal that there has been an increase of 3,000 per cent in the number of workers caught with cocaine in their system over the past decade.

This is particularly significant because drugs like cocaine are swiftly flushed out of the system and can be hard to detect, indicating that users are high during the working week, not just at weekends.
Nearly 7,000 people were also found with traces of heroin, cannabis, ecstasy and other illegal drugs in 2005. Overall, more than 5 per cent of workers are now failing drugs tests, a rise of 18 per cent. The new findings are based on 480,000 tests carried out since 1996 on workers across a variety of professions, from office workers to train drivers.
The true scale of the problem is likely to be far higher, according to Medscreen, which supplied the figures and does about half of all UK workplace drug tests. In some companies as many as one member of staff in four who were tested had a positive result for drugs or alcohol. 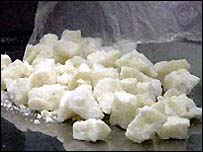