The Zimbabwe government on Monday finally fingered the cause of the dramatic collapse of the country’s agricultural sector — a monkey.

While the world has been fixated with a state-sanctioned land grab of commercial farms by veterans of the country’s liberation war, the Zimbabwe government has nailed what it believes to be the main saboteur of the country’s agricultural production — a vervet monkey.
Agriculture Minister Joseph Made told parliament that damage caused by a monkey to a transformer at the country’s largest fertiliser supplier had effectively crippled the country’s production capacity, creating a food deficit.
Made said "investigations" revealed that a monkey was responsible for the extensive damage caused to one of the only two transformers at fertiliser manufacturer, Sables Chemicals. The company is based in the Midlands.
Made told MPs: “Our investigations have shown that a monkey caused damage to a transformer thereby sabotaging our preparations for the coming season. If it was not for that monkey, the situation was not going to be as bad. 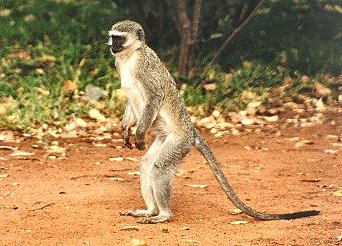 "We now have to import a huge chunk of our fertiliser requirements from neighbouring South Africa. Repairs to the transformer take about six months.”
Made told MPs that the monkey "tampered" with the transformer and was electrocuted in the process.
According to Made, the damage to the transformer could be a blessing in disguise for other Zimbabweans as Sables Chemicals is officially the country’s largest consumer of electricity, followed by mining giant, Zimplants which is
situated in Mashonaland West.
As a result, the Zimbabwe Electricity Supply Authority (Zesa) has reduced blackouts and load shedding across the country.
The problems at Sables have forced the price of fertiliser to shoot through the roof by over 100 percent. A 50kg bag of ammonium nitrate doubled in price to $4 400, and on the parallel market is going for more than $5 000.
The Zimbabwe government has been warned that the country faces a severe food deficit, largely due to lack of productivity on the country’s farms following an often violent government-sanctioned take-over of commercial farms from white land owners.
Faced with the crisis, President Robert Mugabe’s government has deployed soldiers, police and intelligence officials to take over the food security to shore up falling production.
Critics say the black farmers have been hamstrung by shortages of inputs such as fuel, seed and fertiliser while the majority lack the skills to produce on a commercial scale.

In the past year, the army has been involved in low-key production of the staple maize and wheat but Made said on Monday the police and air force had also joined in and would plant 300,000 hectares of grain crops this season, which starts in six weeks.
Writing on New Zimbabnwe.com in June, opposition MDC agriculture secretary Renson Gasela warned that the country faced a serious food deficit with only 30 percent seed of the national requirement available to farmers.
Gasela fears there is a deliberate policy by the government to sabotage food production and then turn around and use food aid in political campaigns.
He said: "No-one can convince me the government is willing but unable to plan properly and get the country out of the food deficit. Visit Grain Marketing Board depots and see how rural district councillors are daily coming to get either mealie meal, seed or fertilisers, which products are sold to Zanu PF councillors only.
"It is therefore the permanent interest of the government to be in control of the people."
Agriculture Minister Joseph Made has in the past been slated for claiming the country has enough food reserves, only to turn around in time of crisis and say the country needs food aid.
The United Nations estimates that close to half the country’s population may need food aid by the end of the year, although the government still insists that it will not beg for food.
0