Researchers at Brookhaven National Lab in Upton, N.Y., report evidence linking the brain and stomach with emotions to cause overeating and obesity.

By looking at how the human brain responds to "fullness" messages sent to the brain by an implanted device, the scientists have identified brain circuits that motivate the desire to overeat. The study says these circuits are the same that make addicted people crave drugs.
The scientists have also verified that these circuits play a critical role in eating behaviors linked to soothing negative emotions.
The study appears in the Oct. 17 issue of the Proceedings of the National Academy of Sciences.

However, statistics aren’t really necessary to prove many Americans are too heavy. 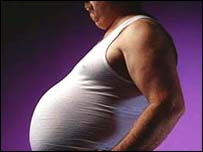 The evidence is in plain sight.

But Krista Clark, registered dietitian at Fremont Area Medical Center, is working to change that view.

The healthy eating program is one solution to what Clark calls a “remote control” society.

Americans routinely use that device as well as other labor-saving inventions, she said, noting luggage and backpacks now come equipped with wheels, microwave cooking has replaced standing at the stove, and wet laundry now goes into a dryer rather than outdoors to a clothesline.

“When people think of exercise, they think it has to be scheduled,” Clark says. “You don’t have to do that.”

Each day on her way to work, the dietitian says she sees a woman walking for exercise in a parking lot. The woman walks every day, rain or shine.

Some people have weight problems due to emotional eating – consuming food for reasons other than real hunger, Clark says.

To pinpoint that possibility, she suggests the charting of food intake and accompanying emotions for a month.

“Write down everything you eat,” she says, “and how you feel when you ate it.”

By planning ahead and minimizing the length or frequency of particular situations, people can sometimes avoid the overeating that occurs.

Watching how much and how quickly food is consumed is also essential.

Americans have grown accustomed to eating larger than necessary portions, such as 8-ounce steaks and 6-ounce chicken breasts, says Clark, noting such entrees are twice the recommended size.

By exercising and watching their food intake, people can, in some cases, control their cholesterol level and diabetes, and even reverse pre-diabetic conditions, the dietitian said.

The “Create Your Weight” program currently under way is not open for enrollment but another session may be held in the spring, Clark said.