The recorded sound of a parent’s voice urging their child to wake up and get out of bed is a better smoke alarm than conventional tone alarms, a study shows.

Conventional domestic tone smoke alarms failed to wake the majority of children during deep deep, "but the personalised parent alarm used in this study did", said study chief Dr Gary A. Smith.
Dr Smith is the director of the Centre for Injury Research and Policy at Columbus Children’s Hospital in Ohio.
In the study of 24 boys and girls aged six to 12, investigators triggered a conventional tone alarm during the first cycle of deep sleep and the experimental voice alarm during the second cycle.
The voice alarm consisted of the child’s mother saying, for example, "Johnny! Johnny! Wake up! Get out of bed! Leave the room!"
As reported in the journal Pediatrics, 23 of the 24 children (96 per cent) were woken by the parent voice alarm, while only 14 (58 per cent) were awakened by the tone alarm.
As well, within five minutes of waking to the parent voice alarm, 20 children (83 per cent) successfully performed a self-rescue escape procedure that they were taught beforehand. 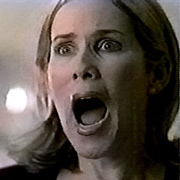 "We did not expect the voice alarm to be so dramatically successful," Dr Smith said.
Nine children woke to the parent voice alarm but not to the tone alarm, but none woke only to the tone and not their parent’s voice.
The children woke up in an average of 20 seconds with the voice alarm versus three minutes with the tone alarm
The average time it took to escape was 38 seconds for the voice alarm versus the maximum allowed escape time of five minutes for the tone alarm.
"It is important to note that the alarms we used were much louder than any alarm currently available on the market for use by families," Dr Smith said.
"therefore, our findings cannot be assumed to support the effectiveness of any currently available smoke alarm."
"This study illustrates that the unique developmental needs of children must be considered when designing an effective smoke alarm for sleeping children," he said.
The next step was to figure out why the voice alarm worked so well, he said.