The P970 can be charged and then taken on the road as a second battery for gadgets with a USB input .

It sounds like a solution waiting for a problem, but Motorola’s P970 battery-powered battery recharger began shipping, four months after the curved, PEBL-like gagdet was announced at the Singapore-hosted CommunicAsia 2006 show. UPDATE (2009):  Motorola’s P970 was Zen-like in its simplicity – a rechargeable battery that recharged your cell phone’s battery via a mini USB port. Too bad it’s no longer on the Motorola Web site. 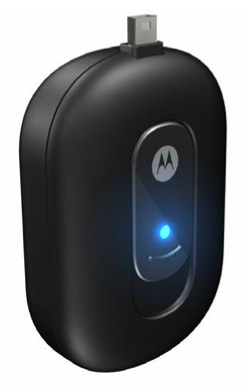 The P970 is essentially a 1700mAh rechargeable battery with a USB port on top. It weighs just 79g and measures 7.4 x 5.1 x 2.4cm. Motorola is pitching the product as an accessory for its own phones and accessories, but we’d bet it will prove handy for other gadgets that can recharge through their mini USB ports, such as phones, PDA and MP3 players.

The idea’s simple: you charge up the P970 at home or work. It’s then ready to be hooked up to your phone when the handset’s battery runs down. Motorola said the P970 is an ideal alternative to switching batteries or carrying an AC adaptor with you – not that phone chargers weigh too much these days.