While mobile carriers, music producers, television networks and equipment providers throw out a never-ending barrage of multimedia goodies to lure consumers into spending more add-on dollars, users seem content to just keep their heads down and tap out more messages.

"Marketers would do well to listen to what the messaging market is saying with its behavior rather than rushing headlong into new mobile media directions," says John Gauntt, senior analyst at eMarketer and the author of the new Mobile Message Marketing: Cash Not Flash report. "The explosive success of accidental consumer applications such as short messaging service (SMS) in contrast to industry-led multimedia messaging service (MMS) holds an important lesson — most consumers value mobile data for what it helps them do."
Mobile data services related to messaging — SMS, MMS, mobile e-mail and mobile instant messaging (MIM) — are the success stories of mobile data.
"While mobile TV, mobile music, mobile games and other multimedia applications seem compelling," says Mr. Gauntt, "outside of Japan and Korea and some leading European markets, these multimedia services barely rate in terms of generating hard cash revenues compared to messaging services, especially lowly text."
For mobile carriers, the continued growth of messaging (up 25% in text-saturated Great Britain in the last 12 months) has provided the bulk of mobile data revenues. According to the latest analyst forecasts, the global messaging market for SMS, MMS, MIM and mobile e-mail should reach $50 billion in 2006 and $100 billion by 2011.

"But mobile carriers are not the only companies intent on exploiting the potential of mobile messaging," says Mr. Gauntt. "Content providers have caught the messaging bug, too. American Idol used mobile text-based voting not only to demonstrate the size and reach of their audience to advertisers, but also to earn hard cash in the process. NBC’s Deal or No Deal spawned more than 57 million text messages and online votes during the 2006 season. After various revenue splits with carriers and message service providers, the network walked away with a tidy $4 million on top of its advertising revenue."
The combination of a maturing infrastructure and a growing messaging culture is also causing corporate marketers to take notice. 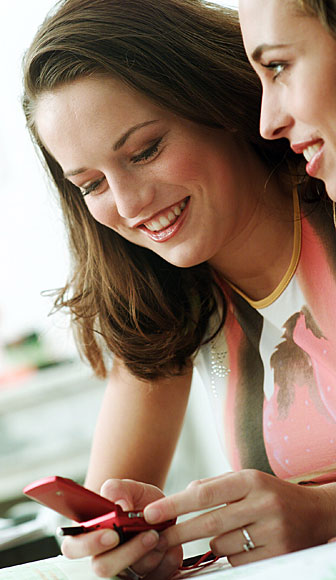 "Starbucks ran a trivia game in 2006 called Starbucks Summer Pursuit that enabled opt-in consumers to receive a series of SMS questions on their handsets. Users then sent camera phone pictures in reply with winners being awarded the chance to participate in a New York City scavenger hunt and a possible trip to Costa Rica," says Mr. Gauntt. "In the UK, McDonald’s gave away chances to win World Cup tickets to fans who text-messaged a code they received with their food orders. Procter & Gamble used text messaging to drive a dating game that included codes and directions to bars, all the time promoting one of its brands of toothpaste. Finally, eBay Spain uses SMS to alert customers that they have been outbid in a given auction with the ability to raise their bid, all through their mobile handsets."
Carriers must perform a delicate balancing act to stimulate use of real-time rich media messaging like MIM without killing the SMS golden goose, let alone voice revenues.
"The growing capability to tether rich media experiences with the long reach of messaging means that marketers just might be able to enjoy the best of both worlds," says Mr. Gauntt, "if they can leave well enough alone and listen to where the messaging market wants to go — instead of trying to force it in new directions."