When it comes to protecting the environment, dynamite is not one of the materials that comes to mind.  Here is an unusual approach to good forest management and at the same time you get to blow things up.

RSPB Scotland began a unique approach to conservation by using explosives to blow up a number of trees in the ancient Abernethy forest.

The project, which involved blowing up the crowns of nine trees, is part of an attempt to increase the amount of large-volume dead wood in the forest.
When trees die, their function within the forest ecosystem is far from over, and they retain a crucial role in the health and productivity of the woodland.
In fact, in a natural forest ecosystem free from human interference, between 20 and 30 per cent of the trees will either be dead or dying.
But much of the ancient and semi-natural woodlands in Scotland have been highly modified over the millennia, through forest management and agricultural development, and this natural dynamic has been either lost or diminished.
The Abernethy forest, in the eastern Highlands, is one of the last remnants of the Caledonian pine forest that once covered the country and the largest remaining stretch of native pinewood in Britain, containing several million trees.
James Reynolds, spokesman for the RSPB, said: "We’ve been simply felling trees and trying to create dead wood habitats in that way before, but we don’t think it allowed the process to get going quickly enough. 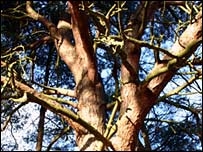 "This is the first time we’ve done this. It’s the only way we can mimic nature’s effect on trees, so that they are rent asunder, torn and shredded by an extreme event. So the trunk splinters and more of the heart wood is exposed. It allows more of the pathogens, microbes and bacteria which start the process of decay to get in there quicker."
He added the exploded trees were of massive value in ecological terms in that, beyond their importance as habitats, they recycled the nutrients of the forest and acted as carbon sinks for as long as a century.
RSPB Scotland’s conservation experts targeted trees aged between 100 and 200 years, ranging in height from 40 to 60 feet, and far from visitor routes.
Ten trees were meant to be blown up, but one specimen was spared after it was judged to be too close to a power line.
Holes were drilled into the trunks and small charges packed into them at around 25 feet from the top of each crown.
The resulting explosion reduced each one to a "totem pole". It is expected that it could be 100 years before each of these trunks finally fall, and a further 300 before they rot into the ground.
Desmond Dugan, site manager for the Forest Lodge section of Abernethy, said this was long-term conservation: "Dead wood habitats, particularly large volume deadwood, are in short supply at Abernethy forest.
"Some people have spoken about the short-term effects of the explosions and the loud noises in the forest, but when we talk about conservation in Abernethy, we’re looking at it into the next century, not next week.
"The exploded trees will be carefully monitored to measure the effectiveness of this novel management. Explosives may sound extreme but the effect will be no more catastrophic than a wind-snapped, lightning-struck or avalanched tree." 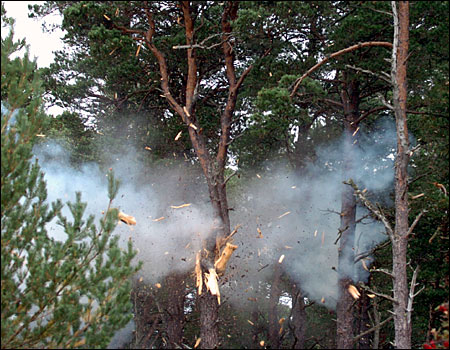 There is great competition among bird species to secure what are generally scarce habitats and nesting birds are often evicted by more dominant birds such as goosanders, goldeneye ducks or tawny owls, or by mammals like the pine marten.
A spokesman for Forestry Commission Scotland said that body applauded the charity’s efforts to improve biodiversity:
"We support management to promote more deadwood in pine forests as the level of natural deadwood is generally too low."
Q & A: EXPLODING TREES
Why is it necessary to blow up living trees?
Human interference has resulted in the Abernethy forest ecosystem becoming unbalanced, causing shortage of deadwood that sustains flora and fauna.
Which trees are targeted?
Being an ancient forest, Abernethy has a wide variety, but only Scots pines were chosen for this project
What are the benefits of dead trees?
They provide protection for plants from grazing animals, as well as shelter to birds and small mammals. They are also a store of nutrients that can be cycled through the ecosystem, and of carbon.
How many species rely on dead trees for habitats?
About 16 breeds of birds use them, including crested tits, woodpeckers and swifts.
Will other species benefit?
In winter, the cavities in rotting trees are favoured by butterflies and hibernating bats. They are also colonised by invertebrates, such as stag beetles, and various lichens, mosses and fungi.
Why not use a chainsaw?
The charges will expose a greater surface area than the clean cuts created by a chainsaw, which will in turn accelerate the decay process.
Won’t the process endanger the very wildlife the RSPB seeks to help?
No, the detonations are taking place well after the nesting season. Also, the charges are packed tightly, ensuring that the explosion will be limited to the tree.