Total circulation for Denver’s two daily newspapers continued a downward slide in the latest official numbers posted Monday by the Audit Bureau of Circulations (ABC), an industry trade group that monitors newspaper and magazine subscriptions.
Total combined circulation for The Denver Post and Rocky Mountain News delivered Monday through Friday was 511,610 for the six months that ended Sept. 30, compared to 527,724 copies recorded for the same period a year ago, or a drop of 3.1 percent.
Separately, daily circulation for the Post dropped 3.2 percent to 255,935 copies from 264,300 and the News daily circulation fell nearly 3 percent to 255,675 from 263,425 copies a year ago.
The Saturday News fell to 552,567 copies compared to 593,747 last year and the Sunday Post dropped to 694,053 compared 725,178 copies last year.
The numbers include a category of distribution called "other paid circulation" that includes copies paid for by advertisers, but distributed to homes and business that didn’t order the copies, or those given to schools for free. 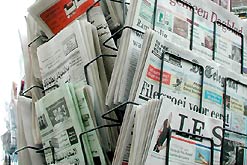 Without those "other paid" copies, the combined dailies circulate 452,957 copies during the week — 221,366 copies for the Post and 231,591 copies of the News.
The "other paid" category is counted in total paid circulation, but it is considered less desirable circulation for advertisers. Many newspapers have moved away from distributing and counting the "other paid" copies, also called "third party sales," as more financial industry research firms have begun tracking such sales, according to a July 2005 edition of trade publication Editor & Publisher.
Combined circulation for the dailies has decreased 39 percent since the two papers entered a joint operating agreement in 2001 that combined the business operations of the two papers but maintained separate, competitive editions of the two newspapers.
The Post, owned by Denver-based Media News Group, and the News, owned by E.W. Scripps compete head to head Monday through Friday. The News has the sole Saturday edition and the Post has the exclusive Sunday edition.
Combined daily circulation was 839,496 copies in 2000, the year prior to the JOA.
The Denver Newspaper Agency, which was created to oversee the JOA between the two papers, announced last week it was laying off as much as 5 percent of its work force in a cost-cutting move. The company employs 1,877 people. The layoffs won’t involve any newsroom positions, but will mean job cuts in circulation, finance, advertising and human resources.

The numbers for the Post and the News follow a nationwide decline in circulation figures at major metro dallies. It is the fourth consecutive semi-annual report from ABC to reflect a drop in daily and Sunday circulation — typically the strongest subscriber day, according to an article by the trade publication Editor & Publisher.
The circulation numbers represent total circulation defined under ABC rules as paid as of Sept. 30 for the previous six-month period. The figures haven’t been audited.