That is what brought Craig Barrett, chairman of Intel Corp., to Shijingwei, a farming hamlet in southern China’s Guangdong province, this week. On a warm autumn day, Mr. Barrett sat in a dusty, one-story cement building for a demonstration of the community’s first Internet-connected personal computer — donated by the US semiconductor giant in August. A village official, Huang Yongqing, showed how residents can use the computer to check previously hard-to-find market prices for sugar cane and fruit and adjust their crop mixes accordingly to maximize their profits.
Intel hopes to work with local companies and governments to replicate the setup in hundreds of other villages in China, and is helping deliver computers and Internet access to rural health clinics and schools. It is also rolling out similar initiatives in India. Dressed in a red turban and shawl, Mr. Barrett inaugurated a high-speed wireless network in the rural town of Baramati on Thursday. The goal for Intel, which makes the chips that run most of the world’s PCs, is to hook a new part of the population on using technology — and, eventually, to turn them into customers.
The Intel projects in two of the world’s largest and fastest-growing economies — and similar ones in other countries — are part of a broader push by it and other tech giants to do well by doing good in poorer parts of the world that until recently have been largely cut off from technology.
Their aim is to reach what executives call "the next billion users" of consumer technologies like the Internet and cellular phones. The images of executives helping the poor can also help maintain good relations with the government, a critical part of doing business in both China and India.
Intel announced in May plans to spend $1 billion over five years to improve Internet access in developing countries and train teachers how to use technology. Motorola Inc., in cooperation with the GSM Association, an industry group, is making specially designed mobile phones priced under $30 for people in emerging markets who have never used them before. Millions of the phones have already been sold. Microsoft Corp. is experimenting with lower-cost pricing models for its software in developing countries, and helping setting up Internet kiosks in rural areas.
Companies including Intel rival Advanced Micro Devices Inc. and PC maker Quanta Computer Inc. of Taiwan have joined in a project called One Laptop Per Child to make laptop PCs for $100 and distribute them to schoolchildren in developing countries such as Brazil, Nigeria and Thailand.

The initiatives are part philanthropy, part corporate strategy. Most of today’s users of cellphones and Internet PCs have come mainly from wealthier countries or relatively prosperous parts of developing countries like China. But established markets like the US and Europe are increasingly mature, and even big cities in some emerging markets have begun to see growth level off — China’s more than 400 million cellphone subscribers and 123 million Internet users account for much of its middle and upper classes.
"There are about a billion Internet users. The next billion aren’t going to be city dwellers," Mr. Barrett said in an interview this week in an Indian farmer’s home that buzzed with flies. The trip took him to China and India, where he inspected Intel’s rural technology efforts.
The 67-year-old Intel chairman, a Stanford University-trained engineer who has worked at the company for more than three decades, also heads a United Nations task force seeking ways to bridge the digital divide. In September, he toured four countries in South America and helped wire a small town in the Amazon. In December, he is off to the Middle East and Africa.
Getting technology to rural residents isn’t easy. It requires navigating local bureaucracy, offering extremely inexpensive products and teaching people who may not have easy access to electricity the benefits of the chips, software and computers. And executives acknowledge that their efforts won’t necessarily show up on the bottom line right away.
"This is a good way to do long, long-term business development," said Ravi Venkatesan, chairman of Microsoft India. "We are under no illusions that this is going to generate a quick payoff." Microsoft is rolling out 50,000 computer kiosks in small towns and rural regions across India over the next three years. The kiosks are to be operated by entrepreneurs who will charge small fees for computer services, such as crop prices or accessing government land records. 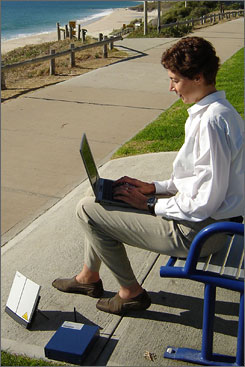 The potential long-term payoff is significant. China and India are both growing at more than 8% and offer massive rural populations that are just beginning to enjoy some of the resulting new wealth. And for technology giants like Intel, Microsoft and Motorola, which are pledging billions of dollars in new investments in China and India, these projects offer grass-roots business tips crucial for success in these complex markets.
For the governments of countries like India and China, the technology projects offer ways to close gaps with wealthier cities — providing more-remote and less-educated residents access to information they wouldn’t have otherwise to improve their own and their children’s fortunes. Both countries have ambitious plans to use technology to maintain their rapid economic development.
In Baramati, India, Santosh Mahadevdhawan paid 15,000 rupees ($335), or three months of savings, a year-and-a-half ago for a stripped-down black computer powered by an Intel chip. His 13-year-old niece, who learned how to use computers from Intel-trained teachers, showed him how to navigate the Web. Soon, he was finding fertilizer tips for wheat, plucking perishable grapes when prices in nearby cities were at a peak, and letting his bananas go untended because prices weren’t worth taking them to market.
His neighbors in Baramati, a farming town five hours southeast of Mumbai, now vie for his computer — typically after 9 p.m., when the local Internet-service provider drops charges for dial-up connections. "I don’t mind," he says of the evening onslaught. "They are my friends."
During his day in Baramati, Mr. Barrett conducted a Web conference at a local hospital with doctors who diagnose patients from different cities over the Internet. He also visited a mobile computer van where a girl answered the former Stanford professor’s math questions.
Making technology more affordable is a key element to Intel’s rural technology push. As part of its $1 billion "World Ahead" initiative, it recently began selling a specially designed PC, developed with Indian companies, that has powerful dust filters, runs off a car battery and costs about $550. Intel is also working with Chinese partners on a lower-cost PC for that market that is likely to be priced between 5% and 10% below the least-expensive existing model.
Intel has helped train 700,000 teachers in China and more than 600,000 in India in the past several years on how to use technology in the classroom. It plans to train a million more teachers in China over the next several years. And Intel is providing Internet-linked PCs to rural health clinics in both countries that let doctors share X-rays and other patient information with more advanced facilities in nearby cities.
"How do you get the next billion users involved?" says Mr. Barrett. "You do that by focusing on the things that are important to them, and that’s education, it’s health care, it’s economic development."
Intel isn’t necessarily targeting the poorest parts of the developing world. Shijingwei, the southern Chinese village Mr. Barrett visited, is located on the outskirts of a city of seven million people. The village, with about 280 residents, has an annual rural income of about $560 a person, higher than the average rural income. "Some of these people can afford PCs, they just don’t know what they can do," says Eric Chang, who helps run Intel’s World Ahead program in China.
Intel’s rural technology initiatives also help strengthen its image in the eyes of the governments in China and India, two countries that are extremely important for its business. China is the world’s second-biggest PC market by unit sales, after the US, and Intel has two chip-assembly plants there. The company plans to invest $1.7 billion in India’s growing market.
Intel and its fellow tech companies aren’t shy about promoting their efforts. In Shijingwei, Intel trucked in some 70 Chinese reporters, in addition to an entourage of dozens of Intel support staff. The company set up a massive, air-conditioned temporary building to hold a news conference, complete with a fake village wall on a brightly lit stage. During the event, a top local Communist Party official offered praise and gratitude to Intel for its efforts. As the building was too small to hold Shijingwei’s residents, Intel piped video of the event to a big-screen TV set outside for the villagers to watch.
0