China incurred a loss of 250 billion yuan (US$32.5 billion) from smoking last year, said a report issued by the China Center for Economic Research with the Beijing University. 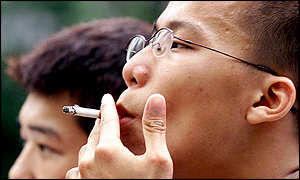 The cost exceeded the pre-tax profits of the country’s tobacco industry, which totaled 240 billion yuan last year as the largest source of China’s tax revenues, according to statistics on the website of the State Tobaccao Monopoly Administration.

Of the total cost, 166.56 billion yuan was paid for medical treatment to 23 major diseases caused by smoking, which was calculated according to a national smoking rate of 35.8 percent found by the China National Nutrition and Health Survey.
At least another 86.11 billion yuan of losses were caused by delay of work, passive smoking, fires, environmental pollution and shortened life span, as the report shows.
The government should increase the tax rate for tobacco enterprises and raise cigarette prices to reduce low-income smokers, said Lin Daqing, a professor with the University of Hong Kong. China will consume 4.5 billion fewer packs of cigarettes each year if it makes the price of each pack 0.4 yuan higher, claimed Fred Cox, a senior director with the US-based Pfizer Pharmaceutical Company.
Cox said the United States saw its smoking rate drop three to 5percentage points in the past ten years, when its cigarette prices rose 10 percent.
Official data show that China has a 55-percent general tax rate on its tobacco industry, while the rate reaches 60 to 80 percent in other countries like Japan, Germany, Brazil and Britain.
However, some experts say higher prices will make little difference to tobacco addicts and may boost tobacco smuggling, as the tax rate on tobacco industry is much higher than other sectors of China.
Price and tax rate hikes are not practical solutions and likely to produce just the opposite effect, said Zhu Xuancai, an expert on smoking control.
Cigarette smuggling cost China at least 15 billion yuan in tax revenue losses each year, nearly 10 percent of the total tax revenues from cigarette sales last year, as the 21st Century Business Herald reported.
Meanwhile, other solutions like increasing the quality standard of cigarettes, cracking down on tobacco advertisements and punishing smoking in public places are suggested to protect people from the harm of tobacco.
China has more than 350 million smokers, about a third of the world’s smoking population. Each year, about 700,000 die from smoking-related diseases.
Last August, the country ratified the Framework Convention on Tobacco Control, an anti-smoking treaty that has been ratified by 110 countries and came into force. ( US$1 = 7.87 yuan)