Public opposition has all but killed a Wal-Mart plan to open its own bank in the United States. But in Mexico, the retailer’s push for a bank is sailing through.

The Finance Ministry has given final approval for the bank, said Wal-Mart de MÃ©xico on Wednesday. The bank would begin operating during the second half of 2007. Julio GÃ³mez MartÃ­nez, the former chief executive of Bank One in Mexico, will lead the independent unit, to be called Banco Wal-Mart de MÃ©xico Adelante.
One possible reason for the different receptions in the United States and Mexico is that, by most estimates, as many as 80 percent of Mexicans do not have bank accounts. Because Wal-Mart plans to offer such accounts, local groups apparently had difficulty trying to stir up public outrage.
Working-class Mexicans have been largely shut out of traditional banks by high fees, minimum balance requirements and intimidating paperwork. Community banks barely exist.
In this venture, Wal-Mart, the world’s largest retailer, still might be the little guy, at least for now. Among Wal-Mart’s competitors in the banking business are global banks like Citigroup and HSBC, which have made almost no effort to attract the vast bulk of working- class Mexicans.
The authorities, beginning with the governor of the Mexican central bank, Guillermo Ortiz, have blessed the entry of retailers into banking as a way to reach people without accounts.
In its statement last week announcing that Wal-Mart, along with four other banks, had received preliminary approval, the Finance Ministry said that it expected the new banks to create more competition and serve markets that the country’s five dominant banks ignore.

In the United States, Wal-Mart’s application for an industrial bank is frozen. The company said that it wanted the bank to process credit card transactions. But community banks in the United States and even larger banks joined the usual Wal-Mart foes like unions, labor activists, small merchants and community groups to oppose the bank.

Moreover, the former Federal Reserve chairman Alan Greenspan worried publicly about regulators’ lack of oversight over the retail parent company. Even legislators in the Congress spoke up.
Wal-Mart tried to head off opposition in the United States by promising not to put bank branches in its stores. For now, its application languishes under a six- month moratorium imposed in July by the Federal Deposit Insurance Corporation on industrial banks.
The reaction in Mexico has been the opposite.
Wal-Mart is the biggest retailer in Mexico and is the largest private employer, with more than 135,000 workers. It has 872 stores, including 502 supermarkets and hypermarkets, along with a national restaurant chain and about 60 small department stores. Wal-Mart continues to grow – in October alone, it opened eight stores and four restaurants – and Wall Street analysts expect sales of as high as $18 billion in Mexico this year. 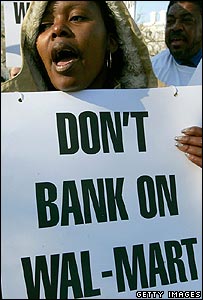 Protesters sometimes focus on the retailer as a symbol of multinational power, and community groups complain that new Wal-Mart stores gobble up scarce water and electricity without adding to the infrastructure. As in the United States, there are fears that Wal- Mart will kill the local markets that are the bedrock of commerce in small towns. Local merchants in many smaller Mexican cities have organized, unsuccessfully, to try to block a planned store.
But Wal-Mart is not the lightning rod for opposition that it has become in the United States, where activists have taken aim at its relatively low wages and meager benefits. In Mexico, its labor practices are no worse than those of its competitors. For many Mexicans, the low prices are what counts. Feel-good ads showing how Wal-Mart has helped its Mexican suppliers export globally also help create a favorable image for the company.
Many Mexicans are even hazy about whether they shop in a Wal-Mart store. The company kept the name of most of the places it acquired when it bought the largest Mexican retailer in 1997. Retail opposition is weak.
"There is an opportunity there," said RaÃºl Argüelles, the Wal-Mart de MÃ©xico director of corporate affairs, said during an interview. "The size of the whole pie can grow for Wal-Mart and for the rest of the players."
The Wal-Mart bank will start modestly with an initial investment of $25 million, offering bare-bones savings accounts and simple personal and consumer loans, Argüelles said. The bank could also lend money to Wal-Mart’s small suppliers and to business owners who shop at Wal-Mart’s Sam’s clubs, a discount warehouse store, he said. But it might take as a long as five years for the bank to start making mortgage loans, he said.
"We are a low-cost company. We will look for a very austere bank that is very focused on the customer," he said.
MarÃ­a de JesÃºs MartÃ­nez may take a little persuasion. A domestic worker, MartÃ­nez was shopping at a busy Wal- Mart-owned store one Sunday evening. About nine years ago, she put the equivalent of about $80 into a Mexican bank.
When she went to withdraw it, only $23 was left, the rest eaten up by commissions. "It just took away all my interest," she said.
Nobody in the family of eight has a bank account. Her daughter, Mariana HernÃ¡ndez, a student, offered only grudging interest.
"It might be an alternative," she said. "We would have to see how they manage it."
0