Scientists have shown that the genetic make-up of humans can vary hugely – far more than was previously thought. A UK-led team made a detailed analysis of the DNA found in 270 people and identified vast regions to be duplicated or even missing.

A great many of these variations are in areas of the genome that would not damage our health, Matthew Hurles and colleagues told the journal Nature.

But others are – and can be shown to play a role in a number of disorders.
"We were certainly surprised; we expected to find that there would be some variation, but we weren’t expecting to find quite this much," Dr Hurles told BBC News.
To date, the investigation of the human genome has tended to focus on very small changes in DNA that can have deleterious effects – at the scale of just one or a few bases, or "letters", in the biochemical code that programs cellular activity.
And for many years, scientists have also been able to look through microscopes to see very large-scale abnormalities that arise when whole DNA bundles, or chromosomes, are truncated or duplicated.
But it is only recently that researchers have developed the molecular "tools" to focus on medium-scale variations – at the scale of thousands of DNA letters.
This analysis of so-called copy number variation (CNV) has now revealed some startling results.
It would seem the assumption that the DNA of any two humans is 99.9% similar in content and identity no longer holds.

The researchers were astonished to locate 1,447 CNVs in nearly 2,900 genes, the starting "templates" written in the DNA that are used by cells to make the proteins which drive our bodies.

This is a huge, hitherto unrecognised, level of variation between one individual and the next.
"Each one of us has a unique pattern of gains and losses of complete sections of DNA," said Matthew Hurles, of the UK’s Wellcome Trust Sanger Institute.
"One of the real surprises of these results was just how much of our DNA varies in copy number. We estimate this to be at least 12% of the genome.
"The copy number variation that researchers had seen before was simply the tip of the iceberg, while the bulk lay submerged, undetected. We now appreciate the immense contribution of this phenomenon to genetic differences between individuals." 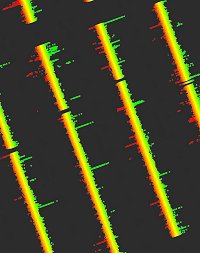 The new understanding will change the way in which scientists search for genes involved in disease.
"Many examples of diseases resulting from changes in copy number are emerging," commented Charles Lee, one of the project’s leaders from Brigham and Women’s Hospital and Harvard Medical School in Boston, US.
"A recent review lists 17 conditions of the nervous system alone – including Parkinson’s disease and Alzheimer’s disease – that can result from such copy number changes."
Scientists are not sure why the copy variations emerge, but it probably has something to do with the shuffling of genetic material that occurs in the production of eggs and sperm; the process is prone to errors.
As well as aiding the investigation of disease and the development of new drugs, the research will also inform the study of human evolution, which probes genetic variation in modern populations for what it can say about their relationship to ancestral peoples.