Children who start dating before their teens are at least twice as likely as other youngsters to become smokers, researchers said on Friday. 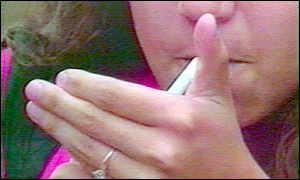 The link was particularly strong in preteen girls who are increasingly taking up the habit.

"Kids who start dating early, about 11 or 12, are two to three time more likely to take up smoking by the time they reach 16," said Robert West, a professor of health psychology at University College London.
"They are between six and nine times more likely to begin smoking in their teenage years," he added in an interview.
West and his team believe the findings could fill in some of the missing pieces about what motivates preteens to experiment with cigarettes and how to discourage them.
The results of the study published in the journal Addiction are troubling because most adult smokers started when they were adolescents and efforts to prompt them to quit, or to prevent children from starting, have had limited success.
Girls who started dating early were nine times more likely than their contemporaries to begin smoking by 13 years old. They also had three times the risk of being a smoker by the time they left school.
The risk was lower for boys.
"This is particularly interesting because recent figures show that while the number of 14 to 15 year old boys admitting to smoking has nearly halved to a quarter, the number of girls of the same age who say they smoke has risen to nearly half," Jenny Fidler said, a co-author of the study, said referring to results from a British household survey.
Even when the researchers considered other factors that influence smoking such as whether parents and peers were hooked on the habit, ethnicity and deprivation, early dating was still an influence.

They suspect smoking and dating young could result from children wanting to act like adults. A desire to be popular and impress their peers could also be a factor.

"The most likely explanation is that both of these (dating and smoking) reflect a tendency to think of themselves as, and to want to be, grownup," said West.
"If that is the case if offers us some clues as to what we might do to prevent kids from taking up smoking at this age," he added.
The findings of the five-year study are based on a survey of more than 2,000 British children.