In Germany plans have been suggested to build a new playground – not for children, but for elderly people. 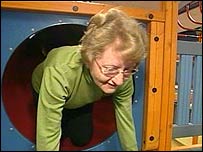 The authorities in the city of Nuremberg are hoping to get enough funding for a playground tailored to suit the needs of the elderly.

They would incorporate activities to keep fit and stimulate the mind. If it proves a success, the idea could be adopted across the country.
If children can go to a playground, then why not pensioners as well.
This is the argument put forward by Horst Foerther, the deputy mayor of Nuremberg, who is planning to build the playground.
It will have giant chess boards, areas for card-playing and, for the more adventurous, it will have a running track and even a badminton court.
But there will be no swings or slides – the aim is to help elderly people keep fit and stop them getting bored.
Germany has one of the lowest birth rates in Europe – with an ever growing number of pensioners, experts have often warned that a demographic crisis is looming in the not too distant future.
"This country in two decades in the future will be a country of old people, a country of less innovative potential in the economy, a people living from the social systems and a country which is not compared to that what Germany was in the past," says Professor Klaus Bade, a researcher at Osnabrueck University.
The deputy mayor of Nuremberg, Horst Foerther, said he got the idea of a playground for the elderly after travelling to Hong Kong.
He said he saw many pensioners practising Tai Chi outside in parks and realised that elderly people in Germany could benefit from more social activities. 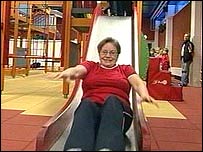