1.) A female rat can mate as many as 500 times with various males during a six-hour period of receptivity—a state she experiences about 15 times per year. Thus a pair of brown rats can produce as many as 2,000 descendants in a year if left to breed unchecked. (A rat matures sexually at age three to four months.) An average rat’s life span is two to three years.

2.) The brown rat (Rattus norvegicus), also known as the Norway rat, and its more acrobatic Asian cousin, the black rat (Rattus rattus), enjoy a nearly worldwide distribution, thanks to their skill at stowing away on ships.
3.) In the mid-19th century, Jack Black, the rat catcher for Queen Victoria, found several color variations of the brown rat and domesticated those he caught. Eager owners of his pet rats included the Queen herself, and it’s rumored—disturbingly—Beatrix Potter.
4.) Rats’ front teeth grow 4½ to 5½ inches each year. Rats wear them down by continuously gnawing on everything around them, including cement, brick, wood, lead pipes, and other small animals.
5.) A rat can tread water for three days and survive being flushed down the toilet. (And it can return to the building via the same route.) There is approximately one rat per person in the United States.

6.) Not all rats live close to humans. Of the 56 known species, many live in remote habitats like marshlands and rain forests, and some are endangered. How sad!
7.) A Hindu temple dedicated to the rat goddess Karni Mata in Deshnoke, India, houses more than 20,000 rats. Many people travel far to pay respect to the rats, which are believed to be reincarnations of Karni Mata and her clansmen.
8.) Perhaps they’re reincarnated teenagers: According to a study by Martin Schein, founder of the Animal Behavior Society, the favorite foods of city-dwelling brown rats include scrambled eggs, macaroni and cheese, and cooked corn.
9.) Well, junk food isn’t much better: Rats eat their own feces, purely for the nutritional value.
10.) A recent study at the National Institutes of Health revealed that decreasing the caloric intake of rats expands their life span. So feed them as much as you can.
11.) Who were they rescuing? In June 2006, animal rescue workers in Petaluma, California, found Roger Dier in his one-bedroom home overrun with more than 1,000 brown rats. The brood began after the obsessed collector took pity on a baby rat he planned to feed to his pet python.
12.) Rat baiting, a popular sport in 19th-century London, pitted a man or a dog against hundreds of rats. Jacko, a 13-pound bull terrier, set the record in 1862 when he killed 100 rats in 5 minutes, 28 seconds.
13.) Drats! A rat can fall as far as 50 feet and land uninjured.
14.) "Drats" has nothing to do with rats. It’s a short form of "od rat," a euphemism for "God rot," which is used like "Goddamn." 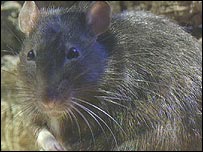 15.) If you were born in 1912, 1924, 1936, 1948, 1960, 1972, 1984, or 1996, then you’re a rat, according to Chinese astrology. This would make you quick-witted, resourceful, and something of a fashionista. Exactly like a rat, except for the clothes bit.
16.) Rats do not sweat. They regulate their temperature by constricting or expanding blood vessels in their tails.
17.) Rats are known to transmit several potentially fatal diseases to humans, including viral hemorrhagic fever, plague, Weil’s disease, and Q fever.
18.) On the bright side, it is extremely rare for a human to get rabies from a rat.

Innie or outie? Rats don’t have gallbladders or tonsils, but they do have belly buttons.
20.) Yeah, but seriously, who wants one? In 2006 it was revealed that a team of scientists at Tel Aviv University in Israel had created a brain chip out of rat neurons.