Kazakhstan has unveiled a new architectural project for its capital Astana – a giant transparent tent that will contain an indoor city. 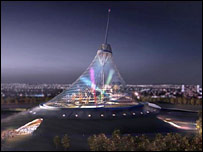 The completion of the dome is expected in 12 months

The 150m-high (500ft) dome, designed by UK architect Norman Foster, will be built in just over a year.

The tent is being made from special material that absorbs sunlight to create the effect of summer inside.
Astana lies in the very heart of the Central Asian steppe. Temperatures there often drop to -30C in the winter. The final shape of the world’s biggest tent was revealed in a 3D model by Kazakh President Nursultan Nazarbayev.
Underneath, in an area larger than 10 football stadiums, will be a city with squares and cobbled streets, canals, shopping centres and golf courses.
The idea is to recreate summer, so that when the outside temperature is -30C, the residents of the Kazakh capital can play outdoor tennis, take boat rides or sip coffee on the pavement cafes.
Called Khan Shatyry, the project is designed by Lord Foster, who has recently built a giant glass pyramid in Astana.
"Nothing of the sort has been done before, and from the engineering point of view it’s an extremely difficult project," says Fettah Tamince, the head of Turkey’s development company Sembol that is building the tent.
Mr Tamince is nevertheless confident the company can complete the construction in just 12 months.
‘Huge risk’
It is a hugely ambitious undertaking, but so is Astana itself.
It was just over 10 years ago that President Nazarbayev decided to move the capital from Almaty to the very heart of Kazakhstan.
Since then the government says it has spent $15bn (£7.7bn) on construction, although some believe the figure is actually much higher.
For this oil rich state, which is an increasingly important global energy player, cash is not a problem.
Still, Mr Nazarbayev recently told the BBC that moving the capital was the riskiest step he had ever taken, and that Astana was one of his biggest achievements.
"It was a huge risk, and I took it intuitively," Mr Nazarbayev said.
"I put everything at stake, including my career and my name. I knew if I had failed it would be a fatal failure, but the success would also be the real success."
At the time, the president added, no-one seemed to believe that he would be able to create a real city in the steppe.
But the Astana skyline still looks more surreal than real – with its marble palaces, shining skyscrapers, metal structures and abstract statues, all surrounded by vast, snow covered emptiness.
Soon, rising above it all, will be the illuminated glass dome of the Khan Shatyry – an appropriate addition, it seems, to Astana’s oil-money fuelled architectural extravaganza. 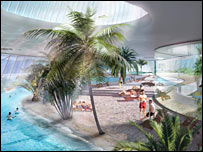 Astana could have its own beach all year round